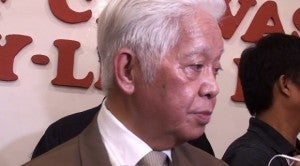 MANILA, Philippines—The Commission on Elections (Comelec) is no longer keen on pursuing charges in the “Hello Garci” scandal of 2004 due to “legal and procedural” obstacles, according to Comelec Chair Sixto Brillantes Jr.

But Brillantes was quick to add that the poll agency was still pursuing electoral fraud charges against those allegedly involved in the cheating attending the 2007 senatorial elections in Maguindanao province.

In both cases, then President Gloria Macapagal-Arroyo was implicated.

“We are now prosecuting them for 2007 on the electoral sabotage case since it has more weight. There has been no progress on the 2004 case despite separate investigations by Congress,” Brillantes said in an interview with reporters on Monday.

He said he did not think it was worthwhile to pursue a case against Arroyo, former Election Commissioner Virgilio Garcillano and others over a phone call Arroyo—who was running for reelection—purportedly made to Garcillano, asking about the vote count during the 2004 elections.

Brillantes said his agency was having a hard time building a case against the “Hello Garci” cast following a 2007 fire that razed the old Comelec building in Intramuros, Manila, where many important documents were lost.

The law states that “election offenses shall prescribe after five years from the date of their commission.”

“We are not giving up but we don’t have that much interest anymore because of several legal and procedural issues,” Brillantes said. “Why will we belabor ourselves [sic] [when] there is weak evidence due to the fire. It is also unclear if the cases have prescribed already.”

Since his appointment as Comelec chair in 2011, the agency has filed electoral sabotage cases against Arroyo, now a Pampanga representative; former Maguindanao Gov. Andal Ampatuan Sr. and former Maguindanao election supervisor Lintang Bedol in connection with the alleged cheating in Maguindanao during the 2007 elections.