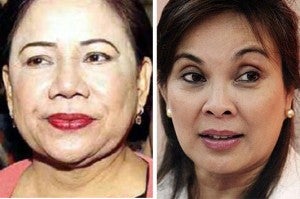 “Do you think that Senator Villar needed her contributions?” said Cynthia Villar, who happens to be the richest senator as per the latest Senate records, eliciting laughter from reporters.

Villar and her husband made money through their real estate business.

She said her husband did not need any financial help from Napoles, who claimed that she coursed the campaign money through a certain Jun Adriano.

Villar said Adriano did help her husband but was not connected with his office.

“Manny said he met thousands of people but he did not accept contributions from people he did not know,” she said.

Villar also did not like her inclusion in Napoles’ affidavit, which she said had to do with accepting 20 computers from the Department of Transportation and Communications on behalf of the House minority bloc then. The contribution was said to have come from Napoles.

“That is just 20 computers. How much is 20? My God, if I knew it came from Napoles, I would not have accepted it,” she said.

‘Face me any time’

In the affidavit that she submitted to the Senate blue ribbon committee on Monday, Napoles also claimed that she gave campaign funds to Senators Alan Peter Cayetano and Francis Escudero, which both also denied.

Escudero told reporters that Napoles had claimed that she gave him campaign funds in 2010 when as early as 2009, he had declared that he was not running for president and that he was already campaigning for President Aquino.

He also said he could not recall when he had met Napoles but was told by a staff member that he had met her before.

For his part, Cayetano said he had never met Napoles, not even in the restaurant owned by his sister, Sen. Pia Cayetano, as claimed by Napoles where she allegedly handed campaign funds to him last year.

“That’s why I continue to challenge her to face me anywhere and anytime, so that people will know who is telling the truth,” Cayetano said.

Cayetano said Napoles was “turning the tables” on other people so as to make her bid for immunity from prosecution acceptable.

“She wants that all politicians, even those investigating her, to be included,” he said. “She also wants the people’s anger to be directed at us, so that her immunity will be granted.”

Cayetano also asked whether the government had made a deal with Napoles, considering that she executed and signed a supposedly “tell-all” affidavit and yet she was not yet granted immunity.

He stressed that Napoles remained the “most guilty” in the scam and that her affidavit was contrary to what whistle-blower Benhur Luy said in his own affidavit.

Sen. JV Ejercito said he felt vindicated when the Napoles camp removed his name from the list of lawmakers implicated in the alleged Priority Development Assistance Fund (PDAF) racket.

“Thank God Napoles made this clarification quickly and asked that my name be deleted from the ‘Napolist.’ Earlier, I was shocked when I saw my name on that list but I am confident with what is true and my conscience is clear that it was a mistake. I never had the chance to talk to Napoles, much more have any transaction with her,” Ejercito said.

Napoles’ lawyer, Bruce Rivera, issued an apology, saying that Ejercito was erroneously included in the list.

Ejercito said he had enough proof that he did not have any transactions with Napoles and her nongovernment organizations (NGOs), even when he was still mayor and congressman of San Juan.

“I will not risk destroying my reputation for a P5-million transaction or for any amount for that matter,” he said. “For the 13 years that I have been in public service, never was I implicated in any graft case or any scam.”

Napoles herself asked for the removal of Ejercito’s name from the list of implicated lawmakers after realizing that the young legislator was not yet a congressman at that time.

‘I never dealt with them’

Sen. Loren Legarda said: “I categorically deny, in the strongest terms, allegations that I had any dealings with Ms. Napoles or any of her group.”

Legarda said she had “never dealt with them and have never even heard of their foundations.”

“Above all, I have never received monetary or any form of illegal benefit from my PDAF, or its equivalent at any time. I have never authorized anyone in my staff or outside of my office to transact with anyone,” she said.

The senator said she had “judiciously” allocated her PDAF to accredited government agencies and local government units “as prescribed by law.”

“I never endorsed any NGO to benefit from my PDAF. Any statement to the contrary contained in any affidavit is a perjured lie and is actionable criminally against those involved in this smear campaign,” she added.

Budget Secretary Florencio Abad denied having ever done business with Napoles or any middlemen acting on her behalf.

“It’s unfortunate that despite the countless opportunities she had to reveal the truth, Ms. Napoles resorted instead to blatant, shameless lying. Her claims about me amount to deception of the sorriest caliber, holding up poorly to scrutiny and collapsing in the face of facts,” said Abad.

“What a disservice her statement is to the people who’ve been waiting to hear the truth all these months. But should we be surprised? Ms. Napoles’ history has made one thing clear to all of us: The Filipino people’s best interests mean nothing to her,” he added.

Abad noted that projects cited by Napoles, which were supposed to have been used to teach the alleged pork queen the ins and outs of the government’s bureaucracy, were nonexistent.

“She claims that when she met me in 2000, I showed her a Saro (special allocation release order) for a P10-million project for which the Batanes Electric Cooperative (Batanelco) would serve as the implementing arm. But no such project exists in the records [of the Department of Budget and Management],” Abad said in a statement.

He said the project was not in the records of the National Electrification Administration and Batanelco.

He reiterated a previous statement, saying that he never had any dealings with Napoles as a public servant. He admitted knowing alleged Napoles middleman Manuel Jarmin but said he never had any transactions with him.

“I have never dealt with Janet Lim-Napoles in any manner, much less through an agent or a middleman,” Abad said.

“While I may be acquainted with Mr. Jarmin, I have never transacted with him in any capacity. Ms. Napoles’ claims about me—that I tapped Mr. Jarmin as my ‘agent’ and that I taught her how to profit illegally from the bureaucracy—are absolutely not true,” he said.

Sen. Bong Revilla on Tuesday asked the Supreme Court to reverse the Office of the Ombudsman’s decision that found probable cause to charge him with plunder and corruption in relation to the PDAF scam.

In a 37-page petition for certiorari and prohibition, Revilla, through his lawyers, accused the Ombudsman’s investigators of flip-flopping in his request to be provided with copies of the affidavits of the witnesses that were used as basis in finding probable cause to charge him, along with Senators Juan Ponce Enrile and Jinggoy Estrada, for being alleged beneficiaries in the scam.

Revilla also appealed to the high court the Ombudsman’s denials of his motions for a new round of preliminary investigation and the creation of a new panel of investigators. He said he was given the witnesses’ affidavits that he requested, but that these were incomplete.