PNP told to prepare for standoff as ousted gov expected to cling on
By: Maricar Cinco - Reporter / @maricarcincoINQ
Inquirer Southern Luzon / 12:53 AM May 28, 2014 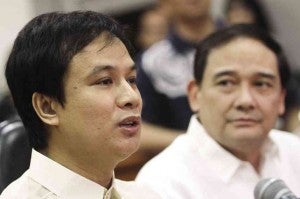 NEW LAGUNA Gov. Ramil Hernandez (left) speaks at a press conference after he was sworn in by the Commission on Elections, which removed actor Jeorge “ER” Ejercito from the position for overspending. Beside Hernandez is former congressman Edgar San Luis, who lost the gubernatorial race and filed the petition to oust Ejercito. NINO JESUS ORBETA

The Commission on Elections (Comelec) on Tuesday swore in a new governor of Laguna province, ousting actor Jeorge “ER” Ejercito, who has been found to have overspent for his campaign last year, prompting Interior Secretary Mar Roxas to order the Philippine National Police to prepare for a standoff.

Newly sworn in Gov. Ramil Hernandez, in a phone interview, said his assumption to office would not disrupt the “chain of command” in the provincial government.

“Effective today, I am already officially the governor,” Hernandez said shortly after being sworn in at the main Comelec office in Manila.

He said he was ready to fulfill the duties of a governor but was leaving the clearing of the provincial capitol grounds, where groups of Ejercito’s supporters have gathered, to the PNP.

“We’ll do it step by step,” the new governor said.

Hernandez is a member of the Nacionalista Party but ran and won as Laguna vice governor in the 2013 elections as an independent candidate.

In the capitol, scores of Ejercito’s supporters refused to leave the capitol grounds.

Officials of the Department of the Interior and Local Government (DILG), which is supposed to enforce the Comelec order, were to meet last night over how to enforce the order.

Josefino Go, regional DILG director for Calabarzon, said his office was still waiting for a writ of execution from the Comelec.

In Naga City, Roxas ordered the PNP to prepare for a possible standoff should Ejercito refuse to step down.

Yesterday, at least 300 of Ejercito’s supporters continued to hold ground in the capitol.

Ejercito had brought the case to the Supreme Court and sought a temporary restraining order which, as of late yesterday afternoon, has not come.

The main gate of the capitol grounds in Sta. Cruz, Laguna, remained closed, although a pedestrian gate was left open for employees. A provincial government employee said government transactions remained “normal” despite the growing tension.

San Luis, a member of the ruling Liberal Party, ran but lost to Ejercito. He filed the petition to disqualify Ejercito for overspending.

“This has nothing to do with politics. As you see, I was the (case) petitioner but it was not me who benefited from it. I am now returning [to  life] as a private citizen,” he said.