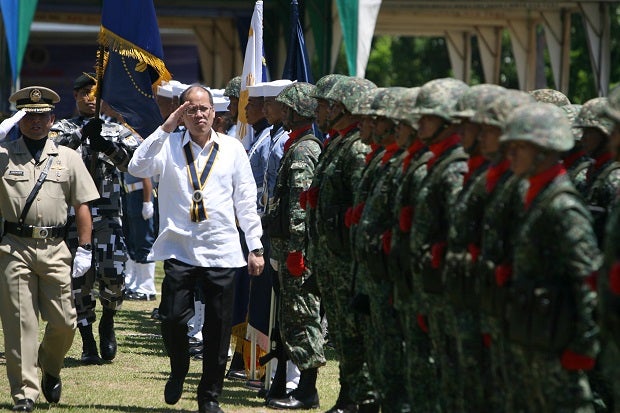 MANILA, Philippines–President Benigno Aquino III on Tuesday paid tribute to members of the Philippine Navy, thanking them for never giving up despite the government’s limited resources.

(I truly admire the Philippine Navy: Despite some limitations of our uniformed services, I never hear you say, ‘Sir, we cannot do this; we are not capable of doing this.’)

He said the sacrifices that Navy men make are incomparable: from being away from their loved ones to spending days and weeks at sea doing routine work.

(Despite such recurring scene, you still need to be alert. You need to always be ready and aware of your surroundings.)

Aquino said securing Philippine waters is an important task since the seas connect the archipelago’s many islands.

(That is why the state should really take care and strengthen the troops protecting the nation.)

After his speech, the President and other government officials watched the capability demonstration of the Navy Forces West Command Center.

The naval station was recently equipped with weather and media monitoring, as well as an asset tracking system that allows the monitoring of sea vessels within 30 kilometers of the base.

Aquino also boasted of a downlink system and a satellite-based maritime surveillance system that would aid the Navy in responding to maritime emergencies.

(These changes are part of the broader strategy to reach the objectives of the Philippine Navy.)

Aquino said the government particularly decided to hold the Navy’s anniversary at its operational command center that is tasked to monitor and protect the West Philippine Sea and the Kalayaan Island Group (Spratly Islands).

Parts of the West Philippine Sea or South China Sea has long been claimed by a number of Asian countries including China. The Spratly Islands, for example, is being claimed by the Philippines, China and Vietnam.

Although Aquino, during a later interview, denied that his presence in Palawan was a message against China, he said the improvements on the naval station raised the Filipino people’s honor.

He said he fully trusted the Armed Forces of the Philippines to uphold its vow to protect the country.
RELATED STORY

Navy to hold anniversary at base facing West Philippine Sea