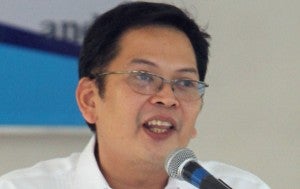 MANILA, Philippines—Reports that Commissioner John Phillip Sevilla was quitting due to a “power play” at the Bureau of Customs were “utterly false and purely fictional” according to Charo Logarta-Lagamon, acting chief of the BOC public information and assistance division.

In a statement, Lagamon said Sevilla “continues to work on reforming the bureau and implementing a 15-month reform agenda to transform the Bureau of Customs from one of the most corrupt and least trusted government agencies into one that is professionalized, competent, credible and responsive to the needs of its stakeholders.”

Several print and online media entities last week reported that Sevilla could no longer take the pressure at the bureau, prompting him to tender his resignation.

One of the reports claimed a BOC insider was being groomed to replace him.

On Monday, another customs official said Sevilla’s woes were not over, citing a “recent meeting” between a Malacañang official and leaders of a religious group, whom the official supposedly consulted regarding Sevilla’s “possible replacement.”—Jerry E. Esplanada