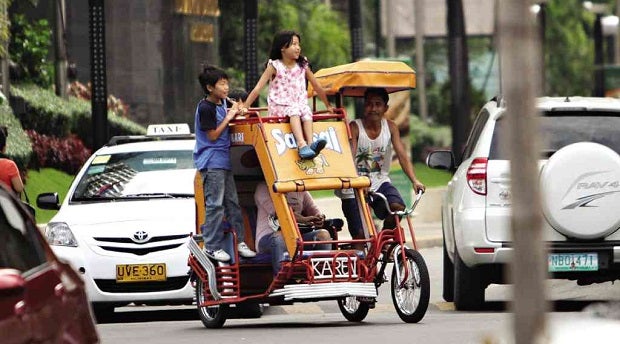 OUT OF PLACE This pedicab in Ermita, Manila, and others like it will soon be barred from competing for road space with cars and jeepneys. GRIG C. MONTEGRANDE

After regulating the operation of buses and trucks, the Manila city government will start reining in other vehicles that are smaller but just as terrible if allowed to hog the lanes.

The three-wheeled transports—tricycles, pedicabs and the latter’s motorized version known as kuliglig—will no longer be allowed on 46 roads in the city, Mayor Joseph Estrada and Vice Mayor Isko Moreno announced in a dialogue with drivers and operators on Friday.

Their owners will also have to register the vehicles and apply for a new franchise since new routes will be drawn up.

“They are really not allowed on main thoroughfares. This doesn’t need legislation because there’s already a law for it,” Councilor Manuel Zarcal, chair of the traffic management committee (TMC), told the Inquirer.

Some exceptions, like Adriatico which is not a national road but still a busy street, will also be subject to regulation through TMC resolutions, Zarcal said.

Once the guidelines for registration are finalized, the ban on tricycles and pedicabs would start “most probably on June 1,” he said.

The registration period in effect grants amnesty to operators of colorum or unauthorized tricycles and pedicabs. As to the kuliglig, a separate set of guidelines may be needed since it is “a gray area, neither a pedicab nor a tricycle,” according to Zarcal.

“We haven’t issued franchises since Mayor Estrada assumed office. The city council will approve the new routes and the additional loading and unloading areas,” Zarcal said.

Estrada said the new policy would also protect tricycle and pedicab drivers from extortionist policemen since it will be clear on where these vehicles are banned.

Moreno noted that about 50 traffic officers had been dismissed for abuses or negligence since Estrada took over.

The ban on three-wheeled vehicles will be enforced on the following roads:

Laon-Laan, Dimasalang, Blumentritt (from Aurora Boulevard to Manila North Cemetery), Road 10, G. Tuazon, and Adriatico (from Padre Faura to Quirino). With a report from Paolo Arguelles