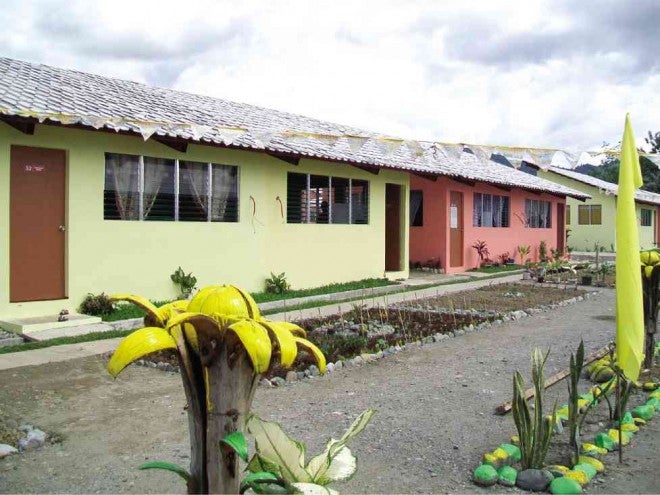 Called Tabang ta Kabalayan (Homes as Help), the new community—made possible with the help of cement maker Holcim Philippines—sits in a 1-hectare area owned by the local government.

Each of the 100 units is made of hollow blocks and its roofing made of concrete roof tiles, which the company has pioneered in New Bataan, said Zita Balogo, Holcim  Davao plant manager.

“Using roof tiles, the house is cool enough that you don’t need to construct a ceiling anymore,” Balogo said.

The village was designed by Green Architecture Advocacy of the Philippines in conformity with Holcim’s “sustainable construction advocacy.”

Ed Sahagun, Holcim Philippines chief executive officer, said the new community was not just a group of houses, but dwellings “that your children and grandchildren would be proud of.”

The local government, through the municipal social welfare and development office, selected the beneficiaries from those whose homes were destroyed or were washed out when the typhoon’s rampaging floodwater wiped out portions of the town proper more than a year ago.

Holcim partnered with the government’s Technical Education and Skills Development Authority  in training 177 of the beneficiaries in masonry under the firm’s Galing Mason (Skilled Mason) flagship program.

The beneficiaries were also trained on carpentry, welding, plumbing and other skills. With their newly acquired skills and materials from Holcim, the beneficiaries themselves were the ones who constructed their houses.

The local government chipped in with a cash-for-food program.

“Holcim didn’t just give houses to the survivors. The company also gave them new life and a means to start again,” said

Gov. Arturo Uy, noting that the cement manufacturer, along with Gawad Kalinga, has been a partner of the province since 2009, when a community for landslide survivors in another Compostela Valley town was built.

New homeowner Normelita Rivera emotionally recalled how difficult it was to lose a home and live in evacuation centers and tents and, later, transfer again to bunkhouses.

“I couldn’t believe we would end up owning a nice home like this,” she said.

Another resident, 28-year-old Jovert Tanduyan, said he would use the skills he learned from the training programs to look for a job so he can support his 2-year-old daughter.

Sahagun, the company chief, thanked the company’s partners for their support even as he pledged additional assistance to the community.

He also lauded the beneficiaries’ resolve to get back on their feet.

Aside from the houses, Holcim also donated a livelihood training center, community center, sports and recreation center and pledged to construct a chapel in the community.

Sahagun said the company had allotted P12 million to

P14 million as part of its corporate social responsibility target for the New Bataan project.

The cement giant chief executive said they would also build a similar community for survivors of Supertyphoon “Yolanda” in Tacloban, tapping some of the Galing Mason graduates in New Bataan as builders.

He also pledged to help the Galing Mason graduates to get jobs in construction companies in Davao City.

“The external support was instrumental in the completion of the project, but the community’s resolve was just as important. We are very proud to support this initiative, and prouder in the determination shown by the people of New Bataan in rebuilding their lives. We hope this will help them get back on their feet more quickly, and that applying sustainable construction principles will lead to a more vibrant community,” Sahagun said.

He said the village could serve as a model for sustainable communities for those displaced by natural calamities, even as he stressed the need “to build smarter to adapt to the changing climate.”

“This is our reality now. Experts have said that we can expect these types of storms to be the norm. But we can reduce [the adverse effects of] these difficult and powerful catastrophes by improving our building practices to make sure structures are more resilient and sustainable,” Sahagun added.

Aside from handing out deeds of occupancy to the beneficiaries, the cement maker and local officials led by Uy and Mayor Lorenzo Balbin also distributed bags and other school supplies to the community’s schoolchildren.