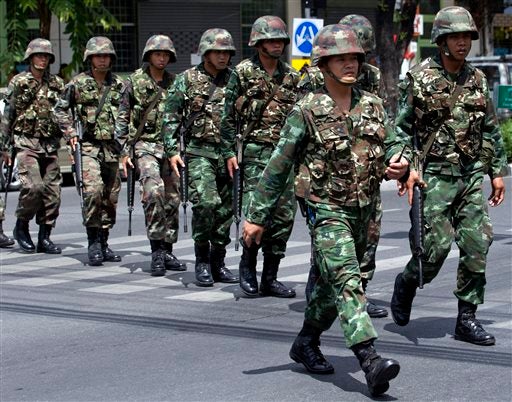 “The Thai military should immediately revoke abusive martial law powers, end censorship, and release all people who have been arbitrarily detained,” the rights watchdog said in a statement on Saturday. “The military should urgently restore democratic, civilian rule.”

“The army is using draconian martial law powers to detain politicians, activists, and journalists, to censor media, and to ban all public gatherings. This rolling crackdown needs to come to an end immediately,” Adams said.

The group has also received reports that the military is detaining people in “unofficial places” like military camps since martial law was imposed.

“The military’s mass arbitrary arrests are made all the worse by holding people in secret detention,” Adams said.

“Those who have allegedly committed crimes should be properly charged and face fair trials in civilian courts,” he added.

The HRW also denounced the rampant media censorship in the country since the junta took over.

The military, HRW said, has stopped newspapers, television and radio stations from releasing stories critical of the military junta.

“Widespread censorship and threats to the media are aimed at silencing any and all critics of military rule in Thailand,” Adams said.

“Thailand’s friends and allies should demand an end to this assault on the media. In a political crisis, free speech is needed more than ever,” he added.

The  junta took over after martial law was declared on Tuesday, the latest in the country’s deepening political crisis since the ouster of its former prime minister, Thaksin Shinawatra, in 2006.

Yingluck, who together with her replacement was detained by the junta, is accused of being a lackey of her older brother Thaksin, who too was deposed in a coup.