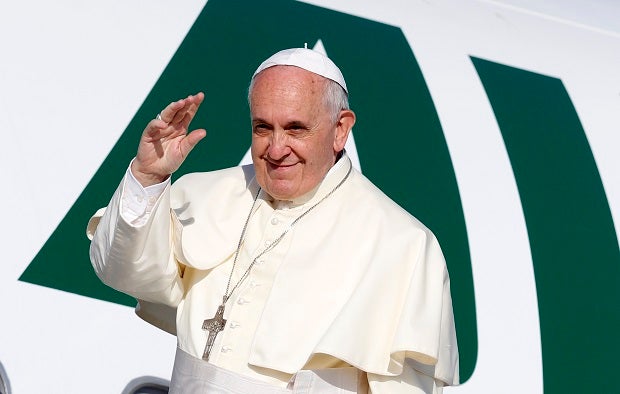 Pope Francis waves to reporters as he boards a plane to Amman, Jordan, for a three-day trip to the Middle East including the West Bank and Israel, at Rome’s Fiumicino international airport, Saturday, May 24, 2014. On the first leg of his trip, Pope Francis will get a firsthand look at the plight of Syrian refugees and witness the toll the civil war next door is taking on Jordan. AP

AMMAN, Jordan — Pope Francis arrived Saturday in Jordan, kicking off a three-day trip to the Middle East that will see him get a firsthand look at the plight of Syrian refugees and witness the toll the civil war next door is taking on Jordan.

Pope Francis talked for a moment with Prince Ghazi at the airport before entering a simple, four-door sedan and heading off to the king’s palace, a group of motorcycles riding alongside him. Small groups of people waving Jordanian and Vatican flags cheered him as he passed.

At the palace, Pope Francis met with King Abdullah II and Queen Rania, their children gathered for the meeting. Outside, traditionally dressed soldiers marched in formation.

On the flight to Amman, the pope told journalists that the trip would be “challenging,” but rewarding.

“My heart beats and is looking to love,” he said.

Despite a cold and fatigue that forced him to cancel some recent appointments, Francis seemed in fine health on the flight and greeted each of the reporters traveling with him one-by-one, even posing for a “selfie” photograph. Before his arrival, those waiting at the airport in Amman felt a magnitude 4.1 earthquake that struck in Israel near its border with Jordan, according to the U.S. Geological Survey. The earthquake caused no damage or injuries.

Francis is due to celebrate Mass on Saturday in Amman’s International Stadium. The Vatican expects some 25,000 people to attend, many of them Palestinian, Syrian and Iraqi refugees. Later, he will meet one-on-one with refugees and disabled children at a church in Bethany beyond the Jordan, which many believe is the traditional site of Jesus’ baptism.

Christians make up about 5 percent of Syria’s population, but assaults on predominantly Christian towns by rebels fighting against President Bashar Assad’s rule have fueled fears among the country’s religious minorities about the growing role of Islamic extremists in the revolt. Christians believe they are being targeted in part because of anti-Christian sentiment among Sunni Muslim extremists and partly as punishment for what is seen as their support for Assad.

The Vatican secretary of state, Cardinal Pietro Parolin, said Francis wants to offer comfort to all Christians who live in the region and encourage them to stay.

“These Christians are living stones, and without their presence, the Holy Land and its holy sites risk becoming a museum,” Parolin told Vatican Television on the eve of the trip.

Jordan last month opened a third camp for Syrian refugees, a stark indication of the strains the civil war is creating for the country. The sprawling facility is designed to accommodate up to 130,000 people and potentially become the world’s second-largest refugee camp. Jordan is hosting 600,000 registered Syrian refugees, or 10 percent of its population. Jordanian officials estimate the real number is closer to 1.3 million.

For the Syrian Christians who will greet Francis, his presence is a chance to show the world their hopelessness as the conflict drags on.

“We are very happy because he will see Christians in the Arab world, he will see us and see our suffering,” said Nazik Malko, a Syrian Orthodox Christian refugee from Maaloula who will be among the 600 or so people to greet the pope at Bethany beyond the Jordan. “We wish that peace will be restored in the whole world, and in Syria.”

Francis will visit a Palestinian refugee camp Sunday when he travels from Amman directly to the West Bank city of Bethlehem. It’s the first time a pope has landed in the West Bank rather than Tel Aviv first, and Palestinian officials are eager to show Francis the limbo endured by generations of Palestinians forced or driven out in the war over Israel’s 1948 creation. Today, along with their descendants, these refugees make up more than 5 million people scattered across the West Bank, the Gaza Strip, Jordan, Syria and Lebanon.

Parolin, the Vatican No. 2, said Francis would emphasize the Vatican’s longstanding position on the Israeli-Palestinian conflict: “The right of Israel to exist and enjoy peace and security inside its internationally recognized borders, and the right of the Palestinian people to have a sovereign, independent homeland, freedom of movement and the right to live in dignity.”

Technically, the main reason for the trip is for Francis and the spiritual leader of the world’s Orthodox Christians to mark the 50th anniversary of a historic meeting in Jerusalem by their predecessors which ended 900 years of Catholic-Orthodox estrangement. That highlight will come on Sunday, when Francis and Ecumenical Patriarch Bartholomew I preside over a joint prayer service in the Church of the Holy Sepulcher, where Christians believe Jesus was crucified and resurrected.

Representatives of other churches also will be present, including Cardinal Bechara Rai, the first leader of Lebanon’s largest Christian sect, the Maronite Catholic Church, to visit Jerusalem since Israel captured the city’s eastern sector. Lebanon bans its citizens from visiting Israel or having business dealings with Israelis.

Francis will spend Monday in Jerusalem, visiting the grand mufti of Jerusalem and Israel’s chief rabbis, albeit separately. He’ll also pray at the Western Wall and visit the Holocaust memorial at Yad Vashem and will become the first pope to lay a wreath of flowers on Mount Herzl, named for the founder of modern Zionism, Theodor Herzl. He returns to the Vatican Monday night.