MANILA, Philippines—‎Tension went high as activists from various groups clashed on Thursday with the policemen amid the 23rd World Economic Forum (WEF) on East Asia in Makati City.

‎Insisting that they be allowed to assemble near the venue of the forum, protesters were dispersed and pushed by the police about 50 meters from their converging area on Ayala Avenue.

A brief melee ensued when some 100 policemen armed with shields and truncheons moved to contain about 60 rallyists.

Some protesters were handcuffed while the police grabbed and took away their banners.

Reyes said they were put under the custody of the Philippine National Police Criminal Investigation and Detection Group (PNP-CIDG) unit in Bonifacio Global City in Taguig.

In the relatively violent protest that lasted for more than an hour, Reyes lamented that this was the first time the police forcefully pushed them away from Ayala Avenue until the northbound lane of Edsa-Buendia.

“Not even during the time of (former President) Gloria Macapagal-Arroyo that we have experienced this,” he added. 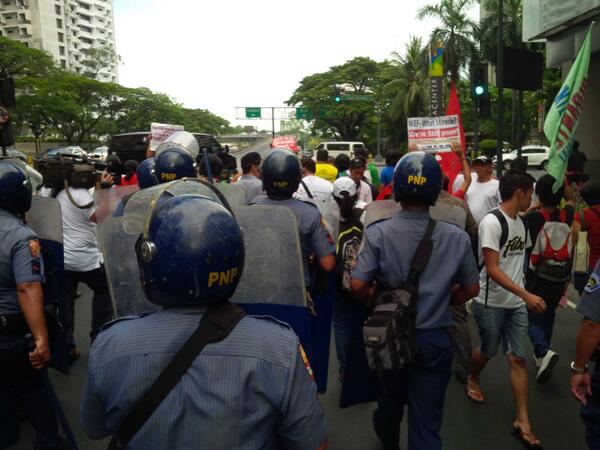 While some 600 international delegates gathered to discuss the economic conditions of about 30 countries, Filipino activists argue that the forum is “an occasion for monopoly of capitalists.”

The rallyists decried that the WEF and the President Benigno Aquino III’s thrust to further liberalize the economy, privatize water services, public hospitals and other public utilities and government services, and open up more sectors to foreign capital “hurt the poor.”

“We are here to tell the world that there is no miracle. Human rights are not respected. Millions are poor, millions are without jobs,” Reyes said.

The “miracle” Reyes was referring to was “The Philippine Miracle” referring to the country’s economic turnaround under the Aquino administration.

Department of Tourism (DOT) Secretary Ramon Jimenez Jr. said this during the WEF plenary session, identifying the Philippines as “The Next Asian Miracle.”

But Senior Superintendent Manuel Lukban, Makati ‎City Police chief, who negotiated with the protest leaders, maintained that the protest was illegal.

“They don’t have a permit. Had they properly coordinated with‎ us, we could have allowed them to assemble here,” Lukban told reporters in Filipino.

He said the protesters provoked the policemen despite exercising maximum tolerance.

The arrested individuals‎, according to Lukban, will be charged with illegal assembly.