Painful and rapid spread of new virus in Caribbean 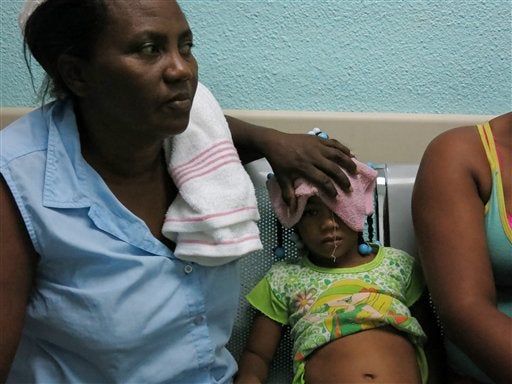 In this May 15, 2014 photo, five-year-old Karla Sepulveda, who suffers chikungunya fever symptoms, waits with her grandmother for treatment in the pediatric area of a public hospital in the coastal town of Boca Chica, Dominican Republic. The mosquito-born virus, common in Africa and Asia, arrived to the Caribbean in late 2013 and has affected more than 10,000 people in the Dominican Republic. AP

SAN CRISTOBAL, Dominican Republic— They suffer searing headaches, a burning fever and so much pain in their joints they can barely walk or use their hands. It’s like having a terrible flu combined with an abrupt case of arthritis.

Hospitals and clinics throughout the Caribbean are seeing thousands of people with the same symptoms, victims of a virus with a long and unfamiliar name that has been spread rapidly by mosquitoes across the islands after the first locally transmitted case was confirmed in December.

“You feel it in your bones, your fingers and your hands. It’s like everything is coming apart,” said 34-year-old Sahira Francisco as she and her daughter waited for treatment at a hospital in San Cristobal, a town in the southern Dominican Republic that has seen a surge of the cases in recent days.

The virus is chikungunya, derived from an African word that loosely translates as “contorted with pain.” People encountering it in the Caribbean for the first time say the description is fitting. While the virus is rarely fatal it is extremely debilitating.

“It is terrible, I have never in my life gotten such an illness,” said Maria Norde, a 66-year-old woman confined to bed at her home on the lush eastern Caribbean island of Dominica. “All my joints are in pain.”

Outbreaks of the virus have long made people miserable in Africa and Asia. But it is new to the Caribbean, with the first locally transmitted case documented in December in French St. Martin, likely brought in by an infected air traveler. Health officials are now working feverishly to educate the public about the illness, knock down the mosquito population, and deal with an onslaught of cases.

Authorities are attempting to control mosquitoes throughout the Caribbean, from dense urban neighborhoods to beach resorts. There have been no confirmed cases of local transmission of chikungunya on the U.S. mainland, but experts say the high number of travelers to the region means that could change as early as this summer.

So far, there are no signs the virus is keeping visitors away though some Caribbean officials warn it might if it is not controlled. “We need to come together and deal with this disease,” said Dominica Tourism Minister Ian Douglas.

One thing is certain: The virus has found fertile ground in the Caribbean, where it is rapidly spreading. The Pan American Health Organization reports more than 55,000 suspected and confirmed cases since December throughout the islands. It has also reached French Guiana, the first confirmed transmission on the South American mainland.

“It’s building up like a snowball because of the constant movement of people,” said Jacqueline Medina, a specialist at the Instituto Technologico university in the Dominican Republic, where some hospitals report more than 100 new cases per day.

Chikungunya was identified in Africa in 1953 and is found throughout the tropics of the Eastern Hemisphere. It is spread by two species of mosquitoes, aedes aegypti and aedes albopictus. It’s also a traveler-borne virus under the right circumstances.

It can spread to a new area if someone has it circulating in their system during a relatively short period of time, roughly 2-3 days before the onset of symptoms to 5 days after, and then arrives to an area with the right kind of mosquitoes.

For years, there have been sporadic cases of travelers diagnosed with chikungunya but without local transmission. In 2007, there was an outbreak in northern Italy so health authorities figured it was just a matter of time before it spread to the Western Hemisphere, said Dr. Roger Nasci, of the U.S. Centers for Disease Control and Prevention.

“With the increase in travelers the likelihood that something like this would happen goes up and eventually it did,” said Nasci, chief of a CDC branch that tracks insect-borne diseases. “We ended up with somebody at the right time and the right place infecting mosquitoes.”

The two species of mosquitoes that spread chikungunya are found in the southern and eastern United States and the first local transmissions could occur this summer given the large number of U.S. travelers to the Caribbean, Nasci said. Already, the Florida Department of Health has reported at least four imported cases from travelers to Haiti, the Dominican Republic and Dominica.

Around the Caribbean, local authorities have been spraying fogs of pesticides and urging people to remove standing pools of water where mosquitoes breed.

An estimated 60-90 percent of those infected show symptoms, compared to around 20 percent for dengue, which is common in the region. There is no vaccine and the only cure is treatment for the pain and fluid loss.

One consolation for those suffering from the illness is that unlike dengue, which has several variants, people only seem to get chikungunya once.

“The evidence suggests that once you get it and recover, once your immune system clears the virus you are immune for life,” Nasci said.