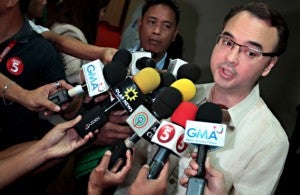 The files purportedly detail Janet Lim-Napoles’ transactions with senators and House members over the disposition of their pork barrel. Yesterday was the deadline for their submission.

Ahead of the deadline, Luy’s lawyers informed the committee that the files were now with the NBI, and the subpoena should be addressed to the agency.

“Benhur can’t produce the files that are not with him. So the committee should reissue a subpoena and direct it to the NBI,” Cayetano told reporters.

If there’s no order for the submission of the files to the Ombudman, there’s no reason for the NBI to withhold the files from the Senate, Cayetano said.

“One thing that can be done is to escort these files to the Senate. These should be sealed and then opened by the committee so that the Senate will have a copy too,” he said.

Luy, through his lawyers, wrote Sen. Teofisto Guingona III, the committee chair, on Tuesday that he had submitted the files to the NBI Cybercrime Division for forensic examination and authentication. “We deemed it more prudent to refer your directive to the Cybercrime Division,” the lawyers said.

The lawyers also wrote NBI Director Virgilio Mendez to submit the files to the Senate by Wednesday in compliance with the deadline.

Guingona, who skipped Wednesday’s sessions, could not be reached for comment.

Justice Secretary Leila de Lima said on Wednesday she would again appeal to Guingona not to release to the media the extended affidavit of Napoles that she was asked to submit.

De Lima is supposed to turn in Napoles’ extended affidavit Thursday to the committee but at press time Wednesday she said she was still waiting for it. She said her office was told that Napoles’ lawyers were “exerting best efforts” to complete the document.

“When I do comply and do submit the affidavit and whatever document to be submitted in time for the extended deadline I will again express that point in my letter of compliance for extreme care and prudence dictate that it was best not to publicize the allegations there,” she said.

De Lima said she would also reiterate in her letter to the committee that it could always refer the extended affidavit to the Ombudsman or the Inter-Agency Anti-Graft Coordinating Council for vetting. She said the Department of Justice and NBI would continue with their own vetting of the extended affidavit.

Guingona last week released the list of lawmakers Napoles had given to De Lima hours after she turned it over to the panel in compliance with a subpoena. She said this had resulted in a wave of denials and that was why she said she had appealed to him not to make it public.