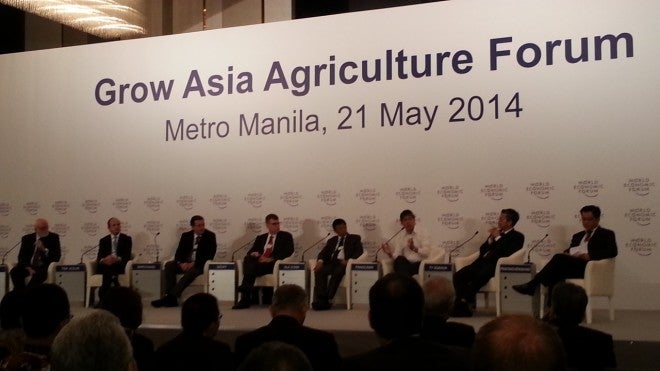 Secretary Francis Pangilinan (third from right) speaks during the Grow Asia Agriculture Forum of the WEF Wednesday saying that farmers are the most neglected people even though they are the most important because they produce the food people eat. MATIKAS SANTOS/INQUIRER.net

MANILA, Philippines—Filipino farmers experience “discrimination,” being “neglected, abandoned and forgotten” and risks, such as climate change, in order to feed the very people who ignore them, Secretary Francis Pangilinan said Wednesday.

“I thought it was only unique to developing nations like the Philippines that farmers are extremely discriminated against, we look down on the farmer, they have been neglected, taken advantage of and used,” Pangilinan said during the closing plenary session of the Grow Asia Agriculture Forum.

“Societies like the Philippines, we look up to lawyers and doctors, but we will need a doctor only occasionally in our life, same with lawyers, hopefully we’ll never need a lawyer in our life. But we need farmers not only every day, we need them three times a day,” he said.

Former senator Pangilinan, who was recently appointed as Presidential Assistant for Food Security and Agricultural Modernization, said that in the Philippines the average age of farmers is 57 years old and the average educational attainment is fourth grade.

The average farm size is 1.5 hectares and their average income is less than $50 a month, he said.

“These are clear indications of their being neglected, of having been abandoned, or simply forgotten,” Pangilinan said.

“A new generation of Filipinos refuse to go into farming, and that is truly a threat to food security. When a generation refuses to farm, who will feed us, where will we get our food?” he said.

Yolanda Kakabadse, President of WWF International, Switzerland and Co-Chair of the 2014 WEF on East Asia, said in her opening remarks that 43 percent of packaged food all over the world goes to waste putting more stress on farmers to have a higher productivity.

“Given the unprecedented growth of the human population it puts a stress on our one and only planet. We must find a way of producing more food in the next 40 years than we have in the past thousand years,” Kakabadse said.

In order to achieve food security, farmers have to be given the respect and assistance they deserve, Pangilinan said.

“Ultimately if we are to achieve food security, we must first secure our farmers … The issue of food is critical, fundamental, essential, and yet the way we look at our farmers, not so,” Pangilinan said.

“Farmers are the most risk averse, he plants 10 times but he harvests four times. The other six he loses to pests, to the rain, too much sun,” he added.

The private sector, which have the most capital that can be invested, and the government, need to work together in focusing on the agriculture sector to help them improve their productivity, Pangilinan said.