WASHINGTON — US President Barack Obama’s job approval rating continued its downward spiral Friday, dropping to 43 percent while his disapproval rating soared to 50 percent, according to a new opinion poll. 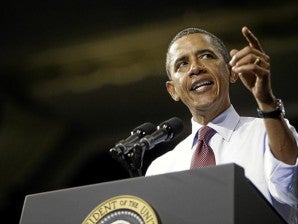 The survey, commissioned jointly by The New York Times and CBS News, also showed that 39 percent of Americans say the economy is fairly bad, and another 47 percent say the economy is very bad — the highest percentage since April 2009.

Only 13 percent say the economy is fairly good and just one percent say it is very good, according to the poll.

In addition, 72 percent of Americans think the country is on the wrong track — the highest percentage so far since the president took office in 2009.

Just 23 percent think the country is currently heading in the right direction, the survey showed. And only 34 percent approve of the way the president has handled the economy, with 57 disapproving.

On the issue of job creation, 40 percent approve of Obama’s performance and 53 percent disapprove, the pollsters found.

The survey showed Americans were divided about the present’s latest $446 billion plan to spur job creation in the country.

Forty-eight percent of those polled say they are somewhat or very confident that Obama’s proposals will create jobs and stimulate the economy. But about as many people — 47 percent — say they are not sure his plan will do that.

Just one in four Americans thinks Obama has made real progress fixing the economy, with 68 percent saying they do not think he has, according to the survey.

This poll conducted among a random sample of 1,452 adults nationwide September 10-15 had a margin of error of plus or minus four percentage points.