At least 2 killed as plane crashes at US air show

LOS ANGELES — At least two people were killed and dozens injured Friday when a vintage aircraft crashed into the ground at an air show in the US state of Nevada, officials and reports said. 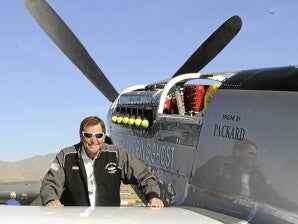 This Wednesday, Sept. 15, 2010 photo, shows long time Reno Air Race pilot Jimmy Leeward with his P51 Mustang. A spokesman for Reno's National Championship Air Races says the P-51 Mustang that crashed into a box seat area at the front of the grandstand Friday, Sept. 16, 2011, at the air race was piloted by Leeward. AP

Some local media said up to 12 people died and 75 were injured in the “mass casualty” crash at the Reno National Championship Air Races, in which the small plane smashed almost headlong in front of a grandstand.

But officials could not immediately confirm casualty figures from the crash, caught on video by a spectator in the stand.

“We’re being told that there are likely fatalities,” race spokesman Mike Draper told CNN, while a statement added the plane “crashed into the box seat area in front of the main grandstand.

“It is a mass casualty situation,” it added.

At least two people were dead, according to local television station KOLO, citing the nearby Renown medical center, which did not immediately respond to a request for information.

Nine of 22 patients being treated are in critical condition, according to the Reno Gazette-Journal newspaper.

Mike Houghton, the head of the Reno Air Racing Association, declined to comment on how many people could have died, but described the devastation at the front of the grandstand.

“It pretty well wiped out the front of the box area,” he said.

The plane crashed near the grandstand at the air show in Reno, but it was unclear if it smashed directly into people.

“It’s just like a massacre. It’s like a bomb went off,” said eyewitness Gerald Lent, quoted by the Reno Gazette-Journal. “There are people lying all over the runway.”

“One guy was cut in half. There’s blood everywhere… There’s arms and legs. One guy just said ‘hey, there’s another foot over here,” he added.

The aircraft was a World War II P-51 Mustang fighter, called the “Galloping Ghost.” It was piloted by a Florida real estate developer, the newspaper reported.

Draper said the plane was a lap or two into the race when its pilot — named as Jimmy Leeward, aged 80 — called in a mayday.

“We don’t know why it crashed. The pilot did call in. He did pull out of the lap, which is what they do. They usually pull up, directly up to clear the race track,” he added.