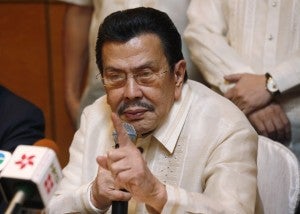 MANILA, Philippines—The Supreme Court has ordered former President, now Manila Mayor Joseph Estrada, and the lawyer seeking his disqualification to submit their final arguments in memoranda which could be used in resolving the issue.

In a two-page resolution made public Monday, the high court ordered Estrada and Atty. Alicia Risos-Vidal to submit their memoranda within 30 days from receipt of the resolution.

“The Court may consider the memorandum alone in deciding or resolving this case,” the high court resolution stated.

Vidal, in her petition, questioned the decision of the Comelec that dismissed with finality her disqualification complaint against Estrada. She said Estrada’s conviction for plunder had rendered him disqualified to run for public office.

She said that the executive pardon granted to him by former President Gloria Macapagal-Arroyo did not restore his right to seek or hold public office.

But Estrada, through his lawyers, argued that the case is already moot and academic since he has been proclaimed.

They said reversing the Comelec ruling would effectively disenfranchise the mandate given to him by some 300,000 voters in the city and effectively deprive their basic right to suffrage.

On the other hand, Comelec told the high court that Vidal’s case was “glaringly similar or intertwined” with the disqualification cases filed against Estrada when he ran for president in 2010 which has been resolved by the high court.