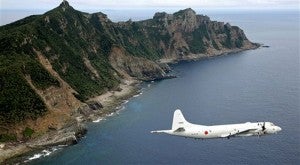 This file aerial shot shows the disputed islands known as Senkaku in Japan and Diaoyu in China in the East China Sea. AP FILE PHOTO

TOKYO – Japan is to establish new military outposts on remote islands, a report said Monday, as Tokyo looks to bolster its defense amid a territorial dispute with China.

Up to 350 troops each could be stationed on three islands in the far southwest, close to the Senkakus, which Beijing claims as its own under the name Diaoyus, the mass-selling Yomiuri Shimbun reported.

With the exception of the main Okinawa island, Japan’s Ground Self-Defense Forces- its army- have no bases on the chain of islands that runs from the bottom of Kyushu to Taiwan. There are limited air force facilities in the area.

The lack of substantial military presence is a source of worry for some in Japan, who caution that it leaves Japan vulnerable to China’s increasingly assertive stance.

Chinese ships have repeatedly moved into the Senkakus’ territorial waters, since Tokyo nationalised some of them in September 2012, to confront Japanese vessels.

The islands lie around 2,000 kilometers (1,250 miles) southwest of Tokyo and around 200 kilometres from the north of Taiwan.

While most of the bickering has been between coastguards from both sides, observers say military ships are loitering over the horizon, with some warning of the risk of a confrontation.

Beijing has spent heavily on its military in recent years in a bid to develop a “blue water” navy that can project force far out into the Pacific.

This means getting through what it calls the “first island chain” including Japan’s southwestern islands and the northern Philippines.

Tokyo is now planning to set up new outposts on three islands, including Amamioshima, some 150 kilometres (93 miles) south of the Senkakus, the Yomiuri said, citing unnamed senior defense ministry officials.

Deputy defense minister Ryota Takeda will visit Amamioshima this week to look at establishing a joint research project with the island, it said.

These units are to be in addition to a radar surveillance unit on Yonaguni, where a groundbreaking ceremony was held last month.

Bolstering the defense of Japan’s southwestern islands “has an aspect of strengthening the Japan-US security alliance,” a senior defence official told the Yomiuri.

Chief Cabinet Secretary Yoshihide Suga said under a new defence program, Japan had already decided to enhance the military presence in the southwest and had been conducting research.

“At the moment, however, we have not decided on specific, concrete locations such as those reported,” he told a regular press conference.

China is also locked in separate territorial disputes with Southeast Asian neighbours, including Vietnam where the row has recently flared into deadly riots, and the Philippines.