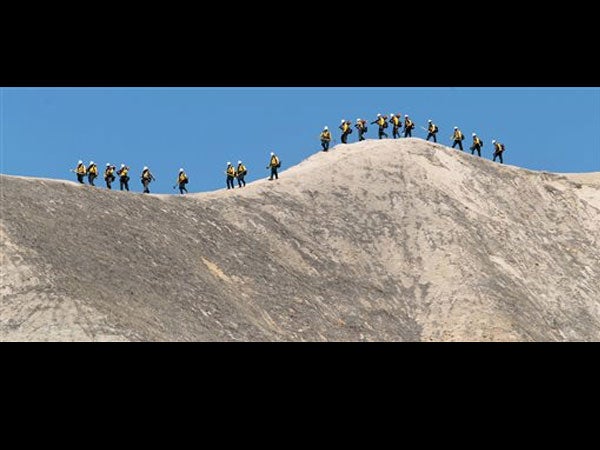 Bureau of Land Management firefighters with the Kern Valley Hotshots get in a morning workout on the bluffs above the Kern County Soccer Complex off Alfred Harrell Highway in Bakersfield, Calif. on Saturday, May 10, 2014. The drought-stricken state is expecting a ferocious wildfire season. AP

SAN DIEGO— California’s governor warned Sunday he was preparing for what could be the drought-stricken region’s worst wildfire season ever.

Gov. Jerry Brown told ABC that the state has 5,000 firefighters and has appropriated $600 million to battling blazes, but that may not be enough in the future.

“We’re getting ready for the worst,” Brown said.

California is on the “front lines” of climate change that is making its weather hotter, the governor said.

Unusually high temperatures, low humidity and gusty winds set conditions last week for a string of wildfires that broke out in San Diego County, destroying at least 47 houses and causing more than $20 million in damage. All evacuation orders were lifted Sunday as firefighters took control over the remaining four of nearly a dozen blazes.

The California Department of Forestry and Fire Protection has responded to more than 1,500 fires this year, compared with about 800 during an average year.

“And in the years to come, we’re going to have to make very expensive investments and adjust,” Brown said. “And the people are going to have to be careful of how they live, how they build their homes and what kind of vegetation is allowed to grow around them.”

Fil-Ams in path of wildfire in Southern California