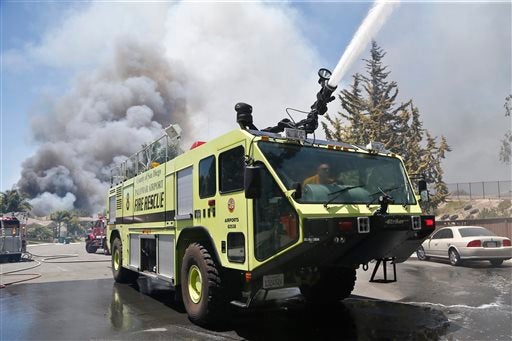 A fire truck send a powerful stream of water at a fully engulfed home as smoke rises from behind during a wildfire Wednesday, May 14, 2014, in Carlsbad, Calif. Carlsbad city officials said mandatory evacuations were in progress Wednesday, and more than 11,000 notices were sent to homes and businesses. AP PHOTO

LOS ANGELES—Thousands of people are fleeing their homes to escape raging wildfires in southern California, which Wednesday triggered the partial evacuation of a military base and a tourist amusement park.

The blazes, which also closed a major north-south highway, come amid record temperatures in the western US state, where the annual wildfire season typically starts much later in the year.

Twenty thousand people were asked to evacuate their homes near San Diego on Tuesday night, although the order was later lifted as firefighters got the upper hand on the blaze.

But on Wednesday multiple fires erupted, including two at the Camp Pendleton base between Los Angeles and San Diego, where a naval weapons station was evacuated, along with military housing and a school.

The fire charred brush along the nearby 5 Interstate freeway which runs up and down the West Coast, at one point forcing its closure although some lanes were later re-opened.

In the nearby seaside resort of Carlsbad, meanwhile, fires burned homes, downed power lines and forced evacuations of homeowners as well as schoolchildren and tourists at the Legoland amusement park.

More than 11,000 homeowners were asked to leave their homes in the city, officials said.

California and other western US states are routinely hit with wildfires during the summer and fall, but blazes have occurred earlier in the year in recent times.

Southern California including Los Angeles has been bracing for record temperatures over 100 degrees Fahrenheit (38 degrees Celsius) this week, with authorities opening cooling centers for those otherwise unable to escape the heat.