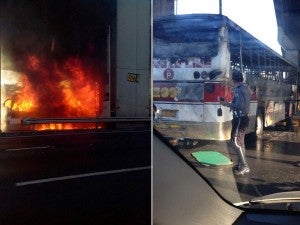 Radio reports said none of the passengers of the St. Jude Transit bus, which was on its way to Cubao, were hurt.

On Twitter, commuters and motorists posted photos of the burning bus that caught fire near Nichols Field in Pasay City.

The Skyway system operator announced around 6 a.m. on Twitter that all northbound lanes were closed.

Both Skyway and the Metro Manila Development Authority cautioned of heavy traffic on roads leading to the area.

The lanes were cleared more than an hour later shortly after the fire was extinguished.