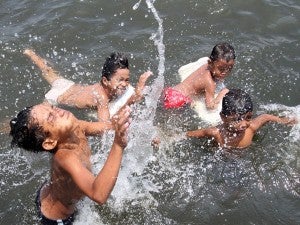 A group of children frolic in Manila Bay along Navotas to beat the summer heat. INQUIRER PHOTO/JOAN BONDOC

MANILA, Philippines—Metro Manila sweltered at 36.2 degrees Celsius at 3 p.m. on Saturday, just slightly cooler than the 36.5 degrees recorded on May 11, the hottest day in the capital so far this year, according to the Philippine Atmospheric, Geophysical and Astronomical Services Administration (Pagasa).

It was even hotter in Tuguegarao City where a reading of 38 degrees was recorded and in Cabanatuan City where the mercury touched 37 degrees, Pagasa said.

On Friday, Metro Manila registered 35.6 degrees Celsius, while Cabanatuan recorded its highest temperature this year of 38.8 degrees. On Thursday afternoon, a reading of 39.7 degrees was recorded in Echague, Isabela, the hottest in the entire country so far in 2014.

The hottest day ever recorded in the Philippines since Pagasa began monitoring the weather was May 11, 1969, when a temperature reading of 42.2 degrees Celsius was made in Tuguegarao City.

Pagasa said good weather would continue to prevail over most parts of the country, with scattered rains in the afternoons or evenings.

“The whole country will be partly cloudy to cloudy with isolated rain showers or thunderstorms mostly in the afternoon or evening,” Pagasa said in its 24-hour weather outlook.

Coastal waters throughout the archipelago will be slightly to moderately rough, it added.

Based on Pagasa’s weekly outlook, partly cloudy weather with afternoon or evening rains will persist at least until May 23, due to the ridge of the HPA.

No tropical cyclone is expected to affect the country this week, Pagasa said.