Fields of gold, frenzy of fiestas 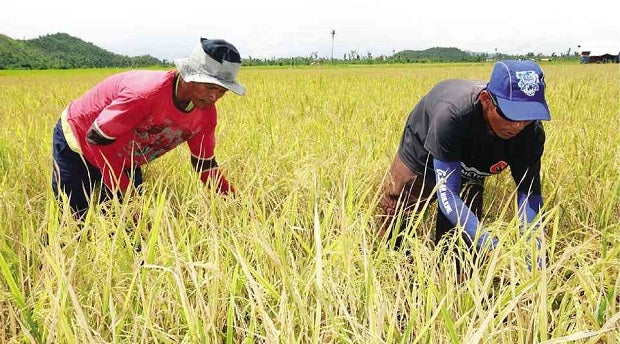 AFTER THE STORM After his rice farm was destroyed by Supertyphoon “Yolanda,” farmer Danilo Catindoy (left) enjoys his first bountiful harvest with farmhand Dionelo Barbosa in their rice field in Barangay Cangumbang in Palo town, Leyte province. DANNY PETILLA/CONTRIBUTOR

PALO, Leyte, Philippines—With a quick swoosh of his harvesting scythe, farmer Danilo Catindoy reaped golden stalks of grain from the same fields of gold that have been his family’s lifeline for generations.

Nearby, his wife Christina, 54, motioned him to pick up the pace, as she reminded him that they need to be in church by noon for their village fiesta in honor of San Isidro Labrador, the Catholics’ patron saint of farmers.

Despite the sun’s summer rays beating down on them, the Catindoy couple had reason to smile.

“After ‘Yolanda’ destroyed our home and farms, I thank the Lord for this golden bounty,” said the 49-year-old father of three, as he wiped away fresh beads of sweat from his dark brow.

When Supertyphoon “Yolanda” blew their house away and flooded their rice fields in Barangay Cangumbang, the Catindoys’ only source of income disappeared, forcing their three college-bound children—Monique, 23, Dino, 19, and Cindy, 17—to stop going to school altogether.

“Now at least they have a chance to go back to school,” their mother said, surveying the precious yield.

At nearby Barangay Pawing, Msgr. Benedicto Catilogo smiled broadly, as he prepared to don his vestments to celebrate Thursday’s fiesta Mass, with the ruins of Pawing Church nearby.

The 57-year-old former parish priest of Palo town reminded the congregation of how lucky they were to be alive.

“There is a deeper meaning to our fiestas today because we are all survivors of Yolanda and we ought to lavish God with praise with this new gift of life!” said Catilogo.

A frenzy of fiestas since May 1 and the bountiful crop harvests that inspired them have been part of the rich tapestry of rural life for the Waraynons in Eastern Visayas during the summer months.

But their celebrations this year have taken a deeper meaning after the unimaginable death and devastation wrought on the fishing and farming communities here by Yolanda six months ago.

Yolanda’s fury displaced more than 28,500 rice farmers in Leyte and Samar provinces, and destroyed some 29,232 hectares of rice lands here, according to recent figures of the Department of Agriculture (DA) regional office in Tacloban City.

“It was providential that most of the rice farmers here were already done harvesting their crops on Nov. 8, 2013. Otherwise, it will take our rice production several years to recover,” said Francis Rosaroso, DA spokesperson for Eastern Visayas.

Sensing a massive humanitarian problem in the wake of Yolanda, the World Food Program (WFP) dispatched $88 million worth of food assistance, which included more than 33,000 metric tons of rice, in a massive relief effort to stave off hunger in the affected areas.

By the end of May, WFP officials here expect to scale down their relief and rehabilitation efforts in the whole of Eastern Visayas.

The quick rice replanting efforts started on Jan. 12 this year coupled by the quick turnaround of decent harvests prompted officials of the Rome-based Food and Agriculture Organization to praise the local farmers’ resilience and ability to bounce back from a mega disaster.

Although fiestas have been a staple in Filipino culture since the Philippine islands were Christianized in 1521, the veneration of saints also offers a chance for the Waraynons to celebrate island life in all its myriad forms.

After the grim toll of more than 6,200 deaths here on Nov. 8, 2013, fiestas in Leyte and Samar have turned into unbridled celebrations of life.

On Friday morning, Fr. Martin Cubi baptized 22 babies at the chapel in Barangay Arado in this town to honor the village patron saint San Roque.

One of those baptized was year-old Joanna Lyn Papiona, daughter of pedicab driver Jimmy, 43, and housewife Gemma Papiona, 36.

The baptism of Joanna Lyn, the couple’s eighth child, was postponed because Yolanda destroyed their house in Arado village and almost killed Jimmy, the head of the household.

Draped in an elaborate white gown with gleaming sequins, Joanna Lyn was ready for the big day in her life when she was scheduled to receive the sacrament of baptism and become one of the more than 100 million Roman Catholics in the country.

“After what Yolanda did to us, we are ready to go on with our lives again,” said Gemma, as she giddily raised her oversized baby, drawing Cubi’s attention.