MANILA, Philippines — Suspected “pork barrel” scam mastermind Janet Lim-Napoles identified 12 incumbent and former senators and more than 70 lawmakers in a one-page “pork” list that she herself signed and was submitted by Justice Secretary Leila de Lima to the Senate blue ribbon committee on Thursday.

The two former senators were Manny Villar and the late Robert Barbers.

The names on the signed list by Napoles was similar to the typewritten document that former senator and rehabilitation czar Panfilo “Ping” Lacson had submitted to the committee except that her document contained other names written in long hand.

Among those written in long hand were a certain “Emano,” a certain “Cong. Angara-APO,” a certain “Maite,” “Butch,” “Cong Gonzales” and another name which was not legible.

At the bottom of Napoles’ signature was the date 4-22-2014, and the time she supposedly signed the document.

The number of incumbent and former congressmen listed on Napoles’ signed list was also notably similar to the one which came from Lacson.

Lacson said his list was given to him by Napoles’ husband, Jaime, who sought a meeting with him last March 27.

Also included in Napoles’ list was Agriculture Secretary Proceso Alcala and other officials of the Departmet of Agriulture, and officials of certain implementing agencies also allegedly involved in the scam.

Guingona said De Lima came to his office to request for a one-week extension on the deadline set by the committee for her to submit the list and signed affidavits of Napoles.

While he granted the one-week extension for the submission of the affidavits, Guingona said he rejected a similar request for the “pork” list.

“She’s (De Lima) saying that Janet Lim-Napoles and her lawyers are still completing the affidavits that’s why they asked for a one week extension,” Guingona said after their meeting.

“As to the affidavits, we agreed to give her one more week but I did not agree to the list. I said it should be submitted today because it’s the deadline as stated in the subpoena so she has given me the list. We have the list now,” the senator added.

Guingona said De Lima told him that the list was signed by Napoles herself. 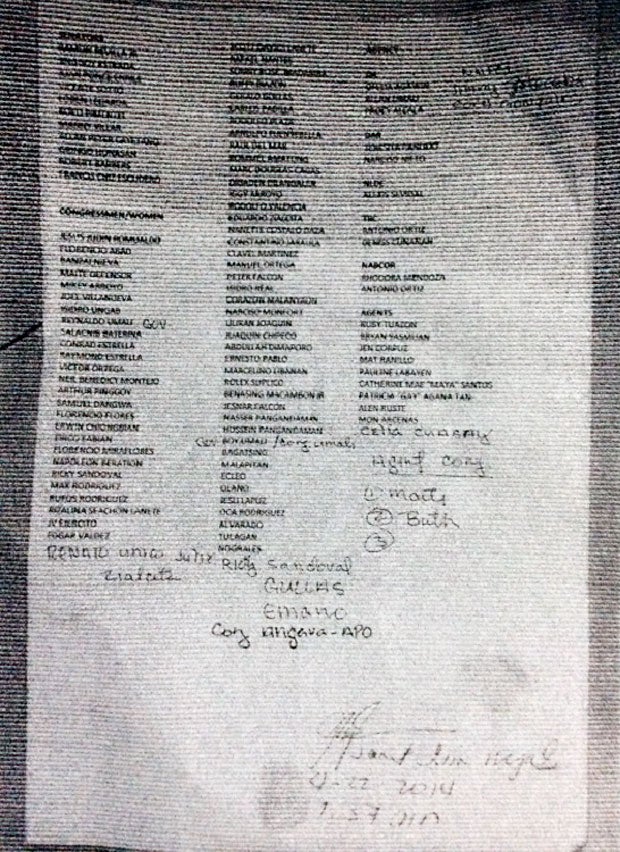 Justice Secretary Leila De Lima submits to the Senate blue ribbon committee a signed list by alleged pork barrel scam mastermind Janet Lim-Napoles containing names of lawmakers whom she claimed to have had dealings with. De Lima submitted the list to the Senate Thursday, May 15, 2014. MAILA AGER/INQUIRER.net