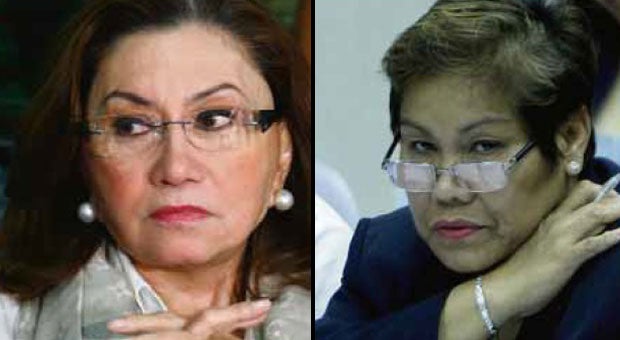 Fourth of a series

MANILA, Philippines—Around P100 million ended in the pockets of agents who acted as bridge between Janet Lim-Napoles and lawmakers in the alleged diversion of congressional pork barrel funds to her bogus nongovernment organizations (NGOs), according to the financial records of whistle-blower Benhur Luy.

Luy’s hard disk drive was copied by the Inquirer when his family and his former lawyer Levito Baligod visited the Inquirer on April 27, 2013, to ask for help to expose the alleged raid by Napoles and her highly placed clients of P10 billion in state funds meant for rural development.

Based on the project cost, an agent received a 2-percent commission from Napoles for every PDAF transaction brought to a Napoles NGO.

Even the lawyers of Napoles—Freddie Villamor and Tet de Joya—served as agents for Sen. Jinggoy Estrada and his mother, former Sen. Loi Ejercito, since 2005, according to the records kept upon the instruction of Napoles.

Energy Regulatory Commission Chair Zenaida Ducut appeared to be the top agent of Napoles for some senators and congressmen. Ducut received the cash advances for Sen. Miriam Defensor-Santiago, according to Luy’s files.

Former Malacañang social secretary Ruby Tuason, who has turned state witness, did not only act as agent for Senators Juan Ponce Enrile and Jinggoy Estrada, she also acted as a one-time agent for Sen. Edgardo Angara in 2008.

Tuason’s late husband Butch Tuason, a former head of the Philippine Sports Commission, also acted as an agent for Enrile and received several “rebates” for it, according to the files.

The records showed that former Anti-Poverty Commission Undersecretary Catherine Mae “Maya” Santos served as a conduit of Napoles since 2003 and had acted as agent of former Sen. Rodolfo Biazon, now a Muntinlupa representative. She was listed in the records also as Olga Tossan and Andrea Reyes.

According to the Luy records, there were these other payoffs:

— Presita So also listed as “Jessica-Daan” received an estimated P1.43 million commission out of Enrile’s PDAF in 2006.

— Mayor Rabang of Umingan, Pangasinan, got P25,000 for a Pimentel project.

— A certain Boy and Ampy received a P550,000 commission for the late Sen. Robert Barbers.

— Pauline Labayen, a staff member of Estrada, also acted as agent and received commissions the amount of which the Inquirer was still trying to determine at press time.

— Washington Plaza for 2005 and 2006 received an estimated commission of P6.1 million for the projects of Biazon, Estrada and Loi Ejercito.

— Mayor Fermo Armendarez received rebates of P50,000 for a project of Biazon. 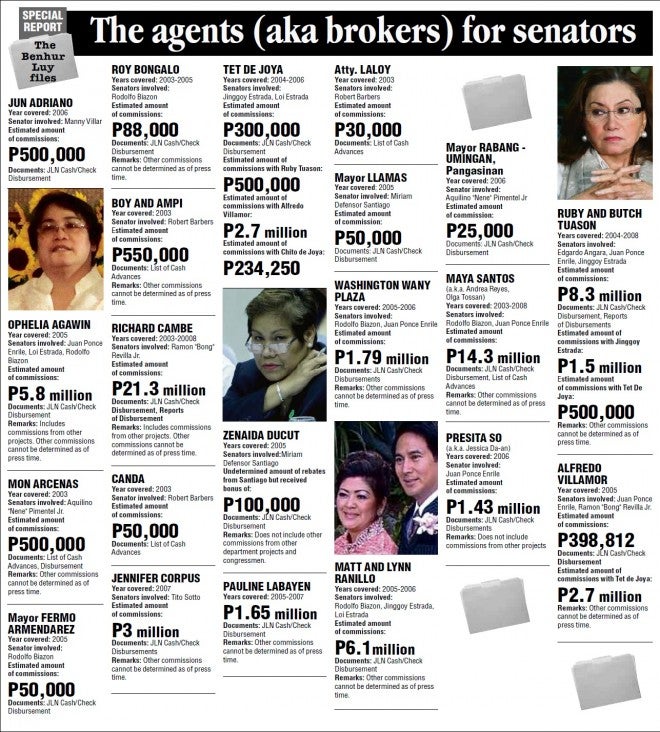 SECOND PART OF THE SERIES

THIRD PART OF THE SERIES