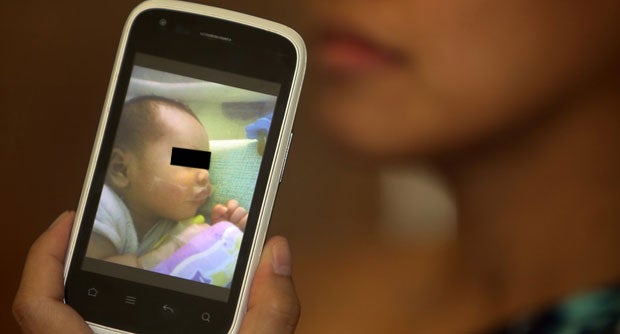 Jasmine Badocdoc shows her baby allegedly being taped by its mouth by an attending hospital worker in Cebu City. CDN/TONEE DESPOJO

CEBU CITY, Philippines—Her first special day as a full-fledged mother was not pleasant.

On Mother’s Day last Sunday, Jasmine Badocdoc, 31, faced the media to expose what she claimed was the abuse her then five-day-old son experienced at the hands of healthcare workers in a hospital in Cebu City.

Badocdoc said she and her family were outraged when they saw her baby boy’s mouth taped shut with a piece of surgical tape when they went to the nursery for a visit.

“I was really bothered when I saw the plaster that sealed my son’s mouth. The ends of the plaster almost reached my son’s ears,” she told the reporters.

She said she initially thought that her son was intubated (gi-oxygen), but when she asked the healthcare worker on duty about the bandage, she allegedly received the answer that they had to tape the baby’s mouth as she wouldn’t stop crying and was “noisy”.

They took a photograph of the baby and posted the picture on a social networking site. The picture started going viral on Sunday.

Badocdoc said she was outraged with the nursery staffer’s reply and demanded that the bandage be removed. The hospital staffer allegedly told Badocdoc, “You can go ahead and take it off yourself, ma’am.”

She then tried to peel off the bandage. A nurse and a nursing attendant came over to assist her. The newborn cried in pain as the bandage was being removed, Badocdoc said.

“Any parent and mother will feel bad about what happened to my son,” Badocdoc added.

“Babies cry because of two reasons, either they are hungry or feel discomfort. If my son was noisy then they can transfer him to an isolation room,” she said. “What if my son suffocated?”

The 31-year-old mother was also disappointed after she heard the nurse saying, “May pacifier din ‘yan. Baka nalaglag.” (There was a pacifier there. It might have fallen off.)

A pacifier was found some distance away from the newborn said Ryan, the infant’s father.

The couple went to the hospital’s information desk to report the incident. They said they were advised not to delete the pictures which could be used as evidence of the alleged wrongdoing.

The couple said they still couldn’t decide on what action to take against the hospital and the healthcare worker involved. Consequently, they have sought the advice of lawyer-friends.

They said they’re awaiting official word from the hospital management.

“I shared this story to everyone not for attention but because I don’t want this to happen to other people,” Badocdoc added.

Ryan also wants to know if the hospital has a closed-circuit television (CCTV) camera in the nursery. He said this would answer the question on who’s directly responsible for the incident.

“How can they monitor their people if they can’t see what they are doing?” the father added.

The baby was born last May 3 and was set to be discharged today, Tuesday.

When Cebu Daily News called Cebu Maternity Hospital Monday, Stanley Libor of the Admitting Section said their director and other persons authorized to speak on the matter were not available.

“They are only available Monday to Friday. I have no special knowledge about that,” he said.

Grace Yana, a Department of Social Welfare and Development (DSWD-7) social worker said that taping the mouth of the newborn baby violated the United Nation’s Convention on the Rights of the Child.

She also believed the incident was not an approved general practice of the hospital but an isolated incident perpetrated by an individual.

“In a workplace, they should always remember what they have been taught on ethics and professionalism,” Yana said.

“Each hospital for that matter has a child protection policy. Despite all these, if a worker does not follow it then he or she is accountable for his or her actions, as well as the establishment,” she added.

Yana also explained that the parents can write a letter of complaint to the hospital administrators then proceed to a police station to have the incident officially recorded or ask assistance from the social welfare office of the local government unit.