NAYPYITAW, Burma—Former President Gloria Macapagal-Arroyo can’t rest easy just yet even after the Ombudsman cleared her of a graft complaint over the P728-million fertilizer fund scam. 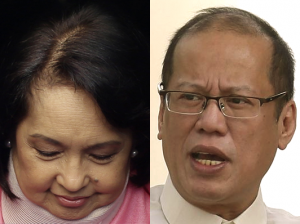 President Benigno Aquino III said the government planned to re-file the case against the now Pampanga lawmaker this time with a local court once it has gathered evidence to build an air-tight case.

Should the government file the case with a regional trial court, the principle of double jeopardy won’t apply because Arroyo has not been arraigned in the dismissed graft complaint, Mr. Aquino explained.

The Ombudsman investigates graft complaints against government officials and then transmits the cases to the Sandiganbayan, where the respondents are arraigned for trial.

“If we are able to get the necessary evidence, to make a stronger case then that can be re-filed,’’ the President told reporters here Sunday night before flying back to Manila.

He made clear that his administration did not file the dismissed graft complaint.

In clearing Arroyo of the complaint, Ombudsman Conchita Carpio-Morales ruled that there was no basis to show her participation in the scheme, or even a hand in the disbursement of the fund.

Otherwise, the government was bent on pursuing cases against Arroyo in connection with the alleged misuse of P900-million Malampaya gas fund, alleged misuse of P366 million in Philippine Charity Sweepstakes Office funds, and alleged conspiracy with elections officials to tamper with votes in the 2007 senatorial elections, the President said.

“There are certain quarters who were talking about vindictiveness,’’ he said.

“My promise to the Filipino people has always been: We will go where the evidence points us to.’’

He said the government wasn’t in the habit of filing cases “just to harass anybody.’’

“If you file a frivolous case, knowing that it’s frivolous, you’re in effect guaranteeing that the person gets off, scot-free, because double jeopardy comes in,’’ he said. “So my instruction has always been: Do not file until you are sure that the evidence is strong.’’

Speaking of the administration’s campaign to root out corruption in the bureaucracy, Mr. Aquino said officials of an agency were also being investigated for their involvement in an anomaly. He declined to give details.

“I’ve ordered an investigation of this agency that really thinks they can pull a fast one on me,’’ he said. “Sorry ha, but I won’t alert them. Can I just say that this group is so bold… They feel that they will never get caught.’’

“I will prove to them that is not the case. Secretary Leila [de Lima] is also involved with that, okay. I told her, `Go as high as you can’,’’ he added.