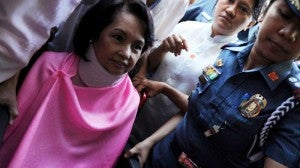 In a resolution signed by Ombudsman Conchita Carpio-Morales on May 2, 2014, “there is no factual, or legal basis” to show Arroyo’s participation in the scheme.

The resolution further stated that there is no evidence to establish that Arroyo has a hand in the disbursement of fund.

“Criminal culpability cannot be imputed upon respondent [Arroyo] on the basis of the doctrine of qualified political agency…In this case, without proof that respondent actually authorized the acts complained of, she cannot be held liable for the illegal acts of her subordinates,” the resolution stated.

“All in all, complainant’s allegations of respondent’s criminal liability for violation of Republic Act 3019 [Anti-Graft Law] lack any factual or legal basis. This office has no other recourse but to dismiss the case,” the resolution stated.

The resolution recommending the dismissal of case against Arroyo was submitted to Morales on May 8, 2013 but Morales approved the recommendation only on May 2, 2014.

In 2011, the Office of the Ombudsman already recommended the dismissal of case against Arroyo, but a reinvestigation was conducted after another plunder complaint was filed.

This is the fourth case dismissed by the Ombudsman against the former president.

The Ombudsman also cleared Arroyo in the plunder case in connection with the P72 million in capital gains tax allegedly due but not collected in the sale of the old Iloilo Airport to Megaworld Corporation in 2007.

Executive Secretary Eduardo Ermita and several others benefitted from the sale.

On the other hand, Arroyo was also cleared in the alleged misuse of the P530 million Overseas Workers’ Welfare Administration.

Reports from the Commission on Audit showed that the funds were properly liquidated and used to help Filipino workers in Kuwait, Jordan, Bahrain.