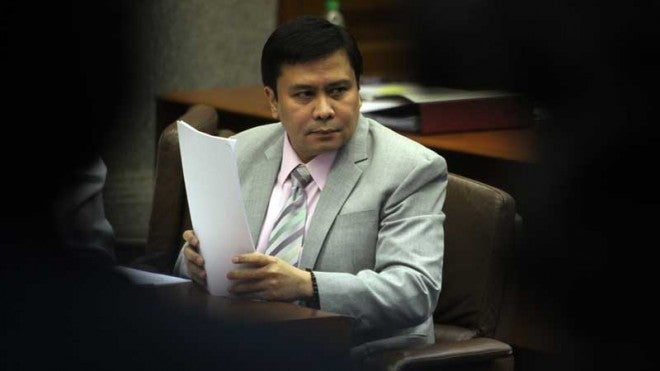 MANILA, Philippines—This time, the Office of the Ombudsman is conducting a lifestyle check on Jinggoy Estrada—not only on the senator but his entire family, including his 8-year-old daughter.

In a letter dated April 15, Deputy Ombudsman for Luzon Gerard Mosquera asked the Bureau of Internal Revenue to furnish his office copies of Estrada’s income tax returns (ITRs) from 2007 to 2012.

Mosquera told Internal Revenue Commissioner Kim Henares that the request was part of the Ombudsman’s investigation against Estrada.

Besides Estrada’s ITRs, Mosquera sought those of the senator’s wife Presentacion, sons Joseph and Emilio, and daughters Janella and Baby Julienne.

“Rest assured that the document/s herein requested shall remain confidential and shall be used by the Office of the Ombudsman in the ongoing investigation/prosecution of the case,” Mosquera wrote Henares.

Estrada cried foul over the lifestyle check, saying it was part of what he called “political prosecution.” He gave the Inquirer a copy of the letter, but declined to say how he got hold of the document.

The senator was furious that his family, particularly his 8-year-old daughter Julienne, was included in the investigation.

“Leave my family out of this,” he told the Inquirer on the phone, referring to the Ombudsman.

“If you want to put me in jail, so be it. But leave my family out of this. Why would you investigate even my 8-year-old daughter?”

Estrada suspected that the Ombudsman was also conducting a similar investigation of Senators Juan Ponce Enrile and Ramon Revilla Jr. who, like him, have been slapped with plunder charges over the alleged P10-billion pork barrel scam.

“This is clearly political harassment,” he said.

Estrada noted that the Ombudsman’s request for ITRs came two weeks after it received the plunder complaint filed by the Department of Justice.

For Estrada, the sequence of events indicated that the government was “still looking for evidence against me even if they’ve already filed the case.”

“That’s because they know that the plunder case is weak,” he claimed.

Jinggoy Estrada: I may mark wedding anniversary in jail