Jinggoy Estrada: I may mark wedding anniversary in jail 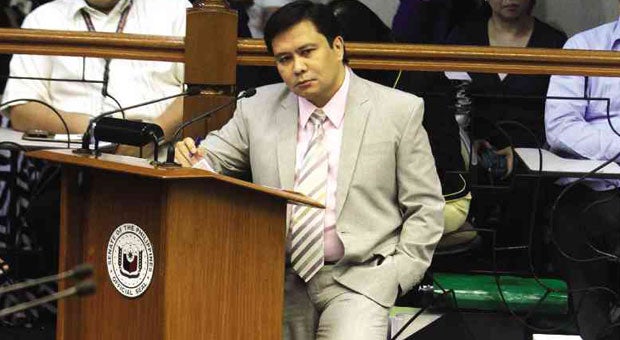 Estrada also described as a moro-moro (farce) the five-day period the Office of the Ombudsman gave him to respond to the affidavits filed by his accusers in the P10-billion pork barrel scam.

“As I said before, I don’t care if he signs it or not,” Estrada said about Ejercito in Filipino in a phone interview with the Inquirer. “No problem if he wants to pin me down. But the committee report contains a recommendation to disbar Manong Johnny [Enrile]. He should have at least considered that.”

Estrada said it was likely that he would be spending his silver wedding anniversary on June 28 in jail.

“My wife and I will be celebrating a milestone. We plan to attend Mass and invite close friends for a simple gathering, if I would not yet be in jail by then,” he said. “But at the rate things are going, it seems the celebration would not happen anymore. Masaklap talaga (It’s really harsh).”

“It seems my arrest is near,” he said, adding that it was likely Ombudsman Conchita Carpio Morales would have him indicted before the Sandiganbayan antigraft court.

Asked about the dilemma he was in after signing the committee report, Ejercito told the Inquirer: “I am accountable to the ones who elected me as well.”

Earlier this week, he said he signed the report “because I believe there should be an investigation but I think it is lacking… Regarding the plunder case, the proper forum would be the courts.”

Estrada noted that he was finally given copies of the affidavits of witnesses Ruby Tuason and Dennis Cunanan only after he had gone to the Supreme Court to compel the Ombudsman to provide him with the documents.

“Perhaps the Ombudsman was alarmed because we went to the Supreme Court,” he said.

Estrada to appeal plunder, graft raps against him

Senators facing plunder may be arrested within the year