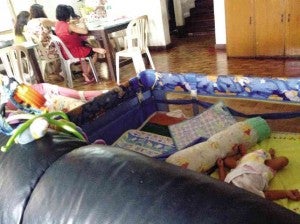 INSIDE Nazareth Home: “Desperate” moms regain hope amid the cries of newborns. photo by ISABELLE LEE

Moms are there for counsel and refuge during trying times. But where can mothers turn to when they themselves are left alone?

Since 1987, a two-story house on J. P. Rizal Street in Project 4, Quezon City, has been sheltering pregnant women who have no one else to lean on, either because their partners have died or abandoned them.

Run by the Kaisahang Buhay Foundation (KBF), the Nazareth Home offers protection for mothers of little means and in such delicate conditions, providing for their daily needs up to the post-natal period.

The home currently has 11 mothers under its roof, including 21-year-old Shaina Mae de la Cruz. It was not hard to explain why she had been the most quiet of the group: Her partner of four years, a taxi driver 20 years her senior, hanged himself in their Quezon City home early February.

“I woke up and I thought he was just standing in our room. But he was already cold,” she recalled. “We were supposed to go back to his province, Isabela, and raise our children there.”

“I never saw it coming. I found out after his death that he was a drug user,” said De la Cruz.

Her husband’s family later blamed her for his death. Her own family, meanwhile, was too far away in Mindanao to give her comfort.

De la Cruz sought assistance from the Department of Social Welfare and Development, which in turn referred her to the Nazareth Home—where she gave birth to their second child in March.

She looks forward to being reunited with her family once she can afford the ship ticket home. Waiting for her there is her firstborn, a three-year-old daughter.

Celia Mendez, 43, who hails from Quezon province, found her way to Nazareth after discovering her husband’s affairs with different women.

“I felt so lost, I had no direction in life; I had nothing—but I had a baby on the way,” she said. Some relatives and friends were quite blunt to suggest an abortion.

Rejecting the idea but still growing desperate, she leafed through the Yellow Pages to look for a “prolife organization,” which later led her to the KBF shelter.

“It took all my strength to have this baby,” Mendez said, referring to John Patrick, who was born May 2. “People make mistakes, people are not perfect. But when you become a mother, there is no turning back.”

With Nazareth Home taking care of her worries, “I told myself that when the time comes for this baby to come out, I will try to catch him with both my hands,” she said with a smile.