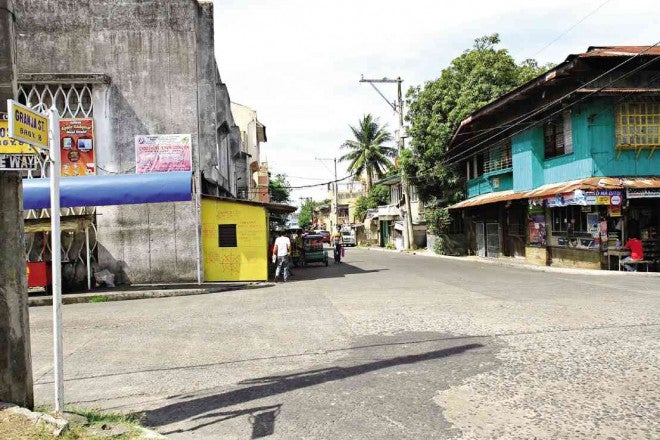 ONE END of Granja Street in Lucena City, where a gate of an Iglesia ni Cristo chapel is located DELFIN T. MALLARI JR/INQUIRER SOUTHERN LUZON

LUCENA CITY—A furious Lucena Bishop Emilio Marquez assailed local officials for changing the name of a section of a major street here, originally named after the priest founder of the city, into Felix Manalo Street, after the founder of the Iglesia ni Cristo (INC).

“They (local officials) were like Judas who conveniently forgot the revered role of Fr. Mariano Granja in the history of Lucena in exchange for a few thousand votes,” Marquez said in an interview on Wednesday.

Granja Street stretches 1,329 meters across the city proper, from its northern tip in Barangay 1 to its end in Barangay 8.

Marquez said officials could have renamed other streets after Manalo and locals would not have minded.

“But renaming even just a part of Granja Street into Felix Manalo Street, just because it is where the back of the INC chapel is located, is a grave disrespect to the memory of Father Granja,” Marquez said.

He said Granja, a Spanish Franciscan priest, was known among Lucena folk as the “father of Lucena.”

The late local historian Cesar Villariba Sr. said the city got its name from the town of Lucena in Andalucia, Spain, from where Granja originated.

According to Marquez, “the proponents just want to earn ‘pogi points’ from the INC for their reelection.”

The change of name was made through Ordinance No. 2517, which was passed by the city council in a special session on May 6.

It was approved by Lucena City Mayor Roderick Alcala on the same day.

The authors of the ordinance, Councilors Benito Brizuela and Rey Oliver Alejandrino, said the new street name was in recognition of Manalo’s contribution to Philippine history and cultural heritage.

In a speech to the council on Feb. 24, Brizuela admitted that he was supported by the INC in the 2007 elections but was not on the INC list of candidates that it supported in the last elections.

Despite this, he said he continued to respect and admire the INC founder.

The ordinance requires consultation with the National Historical Commission of the Philippines (NHCP) on the setting up of a marker in honor of Manalo.

Ten councilors voted to pass the ordinance, except for Councilor Rhaetia Marie Abcede-Llaga, who is in her first term.

Llaga said she opposed the ordinance because of legal questions.

She said the ordinance was railroaded to coincide with Manalo’s birthday on May 10.

She cited a provision in the Local Government Code requiring ordinances changing the names of streets to be approved by a unanimous vote of the council and after consultation with the NHCP.

Citing revised NHCP guidelines, Llaga also said no public place should be renamed if its current name has historical value.

She added that renaming a portion of a public street after Manalo violated the principle of separation of Church and State, as it “would favor one religion over the many other religions” in Lucena City.

She said the naming of the street after Father Granja was a different case, since this was done during the Spanish time, in the 1870s, when the Church wielded political power.

Llaga questioned the lack of a public hearing on the issue. Officials of Barangay 8, where the controversial road is located, also issued a statement signed by over 200 residents saying they were not consulted.

She admitted that she benefited from the much-vaunted block voting of the INC in the last elections but this did not come into play in her position on the ordinance.

The INC is estimated to have at least 5,000 members in Lucena, which has a voting population of about 120,000.

“I was No. 1 on the INC list. Now, I expect that I’m going to lose their votes. But I’m ready to face the consequences,” said Llaga.

She wrote NHCP Chair Maria Serena Diokno twice—on April 11 and May 7—for guidelines on the issue but Diokno had yet to reply.

City council records showed that the original proposal in February 2013 was to change the name of a portion of Quezon Avenue, in front of the INC chapel, into “Kalye Erano Manalo.”

But the proposal was withdrawn, as revised NHC guidelines prohibit the naming of a public place after a person who has not been dead for more than 10 years. Erano Manalo died only in 2009.