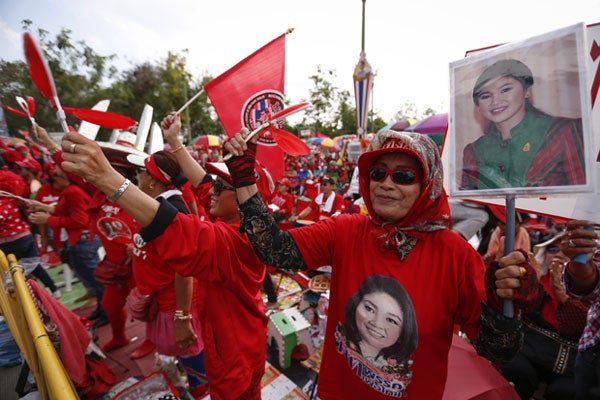 Pro-government protesters wave flags during a rally in Aksa, outskirt of Bangkok, Thailand, Saturday, May 10, 2014. Supporters of Thailand’s embattled government streamed into western Bangkok for a show of force Saturday that follows Prime Minister Yingluck Shinawatra’s ouster and a renewed push by rival demonstrators to install an unelected premier. AP

BANGKOK — Supporters of Thailand’s embattled government streamed into western Bangkok for a show of force Saturday that follows Prime Minister Yingluck Shinawatra’s ouster and a renewed push by rival demonstrators to install an unelected premier.

The gathering of the pro-government movement took place a day after anti-government protesters — who have been campaigning for six months to remove Yingluck from office — ramped up their efforts by laying siege to television stations, surrounding state offices, and demanding lawmakers help them install a non-elected prime minister by Monday.

Jatuporn Prompan, who heads the pro-government Red Shirts staging the rally, said that “as long as the country’s democracy is not safe, we will be here.”

Jatuporn warned that if there’s a coup or an unelected prime minister is installed, the Red Shirts will “escalate our fight immediately.” The pro-government movement has not said what action it will take, but Jatuporn said it would be peaceful and they “do not wish to see people killed or hurt along the way.”

Yingluck was forced from power in a controversial ruling by the Constitutional Court that emboldened anti-government protesters. They called for a “final push” Friday to oust the entire Cabinet and set up an unelected “people’s council” they say would implement still-undefined reforms to combat corruption and fight money politics. They oppose polls tentatively scheduled for July, which the current ruling party would likely win.

Police fired tear gas and water cannons Friday to push back hundreds of protesters who attempted to force their way into the government’s security agency. Six people were reported injured.

The competing rallies were being held several dozen kilometers (miles) apart, but still raised concerns about violence. Jatuporn said “each side should take care of their own supporters” and avoid confrontation.

The Cabinet last week named deputy premier Niwattumrong Boonsongpaisan as acting prime minister. But protest leader Suthep Thaugsuban told followers Friday night that the Senate should select a new premier immediately, since the lower house has been dissolved since December.

“This matter must end by Monday,” Suthep warned, saying the protesters were ready to take over the offices of the prime minister themselves. “If it’s not finished by then, we’ll do it ourselves.”

The protesters achieved a partial victory on Wednesday when the Constitutional Court ousted Yingluck, saying she had violated the constitution by transferring a senior civil servant to benefit her politically powerful family. Nine other Cabinet members were also forced from their posts.

Thailand’s long-running political crisis began in 2006 when Yingluck’s brother, former Prime Minister Thaksin Shinawatra, was toppled by a military coup after being accused of corruption, abuse of power and disrespect for King Bhumibol Adulyadej.

Thaksin, a former telecommunications billionaire, remains highly popular among the rural poor in the north and northeast, and parties controlled by him have won every national election since 2001. The protesters, aligned with the opposition Democrat Party, say they want to remove all traces of his political machine from politics.