Immigration: US warns schools against bias

• Education department has received 17 complaints since 2011 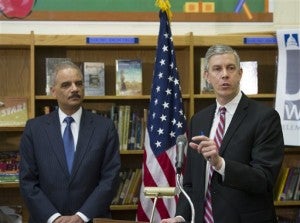 WASHINGTON — Despite a 32-year-old court ruling, school districts continue to raise barriers to enrollment for children brought into the U.S. illegally, the Obama administration said Thursday, characterizing reports of hindrances as troubling.

The Justice Department and Education Department issued new guidance reminding schools and districts they have a legal obligation to enroll every student regardless of immigration status. The guidance says schools should be flexible in deciding which documents they will accept to prove a student’s age or residency.

The Education Department said it has received 17 complaints since 2011 from states including Colorado, North Carolina, Ohio, Louisiana, Michigan, New Mexico and the District of Columbia.

Education Secretary Arne Duncan said that in some instances, school leaders have inappropriately required information such as a child’s visa status or date of entry into the United States.

Justice Department officials said they also have taken action, sometimes collaboratively with the Education Department and sometimes working separately. The Justice Department has entered into settlement agreements with school districts in states such as Georgia, Florida, and Virginia. And it said that after it contacted officials in Alabama, the state education department sent guidance to districts spelling out that they may not bar or discourage students from enrollment because they lack a Social Security number or birth certificate or because their parents don’t have an Alabama driver’s license.

In a settlement with the district in Palm Beach County, Florida, the district agreed to provide translation help during enrollment and to permit homeless students who lack documentation to enroll.

In Henry County, Georgia, as part of a separate settlement, the district agreed to ensure that a parent’s decision to withhold a child’s Social Security number will not keep the child from enrolling.

J.D. Hardin, a spokesman for Henry County schools, said students never were barred from classes in the district, located about 20 minutes south of metro Atlanta. District officials believed they could start the withdrawal process under Georgia’s enrollment rules if a parent didn’t provide a Social Security number or fill out a waiver within 30 days after the student began classes, he said.

Since the settlement, students stay in class whether parents provide the number, fill out a waiver within 30 days or do nothing, Hardin said.

Matt Cardoza, a spokesman for Georgia’s Department of Education, said the state worked with federal officials while updating enrollment requirements in 2011. Cardoza said state education staff will follow up on any complaints they receive about enrollment problems.

Officials from the Education and Justice departments said they have found that states and districts are willing to work with the federal government on the issue.

“It’s a tribute to educators around the country that they recognize how important it is for kids to be able to attend school and are willing to take the steps necessary to ensure they aren’t even inadvertently chilling students’ willingness or families’ willingness to attend them,” said Jocelyn Samuels, acting assistant attorney general for civil rights in the Justice Department.

Attorney General Eric Holder told reporters his department “will do everything it can to make sure schools meet this obligation.”

Children brought into the U.S. illegally are guaranteed the right to a K-12 education under the 1982 Supreme Court decision Plyler v. Doe.

Noelle M. Ellerson, associate executive director for policy and advocacy at AASA: The School Superintendents Association, said in an email that the association appreciates the additional clarification.

Over 2,700 get Covid-19 vaccine after two days of rollout–vaccine czar