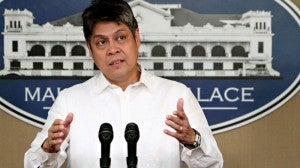 Newly appointed Presidential Adviser on Food Security and Agricultural Modernization Francis “Kiko” Pangilinan gestures during a press briefing after his appointment by the President in Malacanan on Tuesday, May 6, 2014. The former senator is tasked by President Aquino to do some serious “house cleaning” in the Department of Agriculture, which has been wracked by charges of corruption and cronyism under Secretary Proceso Alcala. INQUIRER PHOTO/GRIG C. MONTEGRANDE

MANILA, Philippines—To avoid a situation of too many cooks crowding around in one kitchen, Agriculture Secretary Proceso Alcala and Secretary Francis Pangilinan should meet to clearly delineate their jobs for the sake of the farmers, Sen. Francis Escudero said on Thursday.

President Aquino has appointed Pangilinan, a former senator, to serve as his assistant on food security and agricultural modernization, making him the overseer of four key agencies previously under Alcala.

“Secretary Pangilinan and Secretary Alcala should talk because it’s hard to have too many cooks in one kitchen. Right or wrong, only one should give orders,” Escudero told a Senate press forum.

The pair has to clearly delineate their jobs and work at coordination lest they end up tangling with one other, he said. “That would be disservice to our farmers,” he said.

With the four key agencies under his supervision, Pangilinan will be handling more than half of the Department of Agriculture’s budget, according to Escudero, the chair of the finance committee.

Escudero refused to speculate on the reasons behind the President’s decision to put Pangilinan in charge of the agencies originally supervised by Alcala.

“I don’t think his powers were clipped. President Aquino merely put a Big Brother in position to watch over his shoulder,” he said.

Alcala has come under fire for allegedly allowing the pork barrel scam to flourish under the previous Arroyo administration, and failing to meet rice self-sufficiency goals and improve food security.