Arroyo thankful over junking of fourth case by Ombudsman 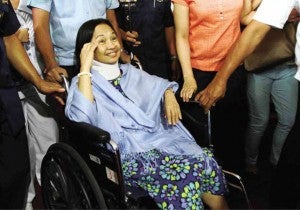 MANILA, Philippines—Former President now Pampanga lawmaker Gloria Macapagal-Arroyo is thankful that the several cases filed against her is being resolved in her favor.

“This shows that truth and justice prevailed. While the damage has been done, we are still thankful that she is being cleared of the charges filed against her,” Arroyo’s spokesman Atty. Raul Lambino said in a phone interview.

With her condition, Lambino said the news has helped reduce stress to Mrs. Arroyo.

Arroyo is currently under hospital arrest at the Veterans Memorial Medical Center (VMMC).

Read Next
Roxas certain he’s not on Lacson’s list of ‘uncooperative’ Cabinet execs
EDITORS' PICK
SSS: Members on home quarantine due to COVID-19 can apply for sickness benefit
Gear up and get ready to play with Yamaha Mio Gear
Mobile COVID-19 vaccination for commuters, transport workers set at PITX
Kalinga, Ifugao, Mt. Province, N. Samar will be under Alert Level 4 from Jan 21-31
PH to send 584 athletes, 161 officials to Vietnam SEA Games
Acer starts the year off strong with the Aspire Vero National Geographic Edition
MOST READ
Imelda Marcos trends on Twitter after octogenarian jailed for allegedly stealing mangoes
Mayor Vico counters vice mayor: ‘Did I say anything about his family?’
PH 51st on list of world’s most powerful militaries
‘Unbelievable!’ Pacquiao hits DA’s plan to import 60,000 MT of fish
Don't miss out on the latest news and information.