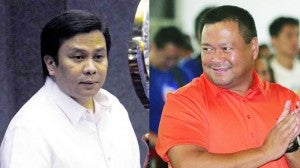 MANILA, Philippines—Senator Joseph Victor “JV” Ejercito was among the 10 senators who have signed the Blue Ribbon Committee report on the Pork Barrel Scam that recommended the filing of plunder charges against Senators Ramon Revilla Jr., Juan Ponce Enrile, and his half-brother, Jose “Jinggoy” Estrada.

“More than my responsibility to my colleagues, I am accountable to the Filipino people who gave me their trust and mandate,” Ejercito said in a tweet Wednesday afternoon.

Only one signature was left before the report will be sponsored on the floor.

“I signed because I believe there should be an investigation but I think it is lacking. Regarding the plunder case, the proper forum would be the courts,” Ejercito told reporters.

Enrile, Revilla and Estrada are facing plunder charges for their alleged involvement in the pork barrel scam masterminded by businesswoman Janet Lim-Napoles.