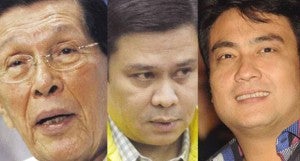 MANILA, Philippines — The three senators about to face plunder and graft charges for allegedly pocketing their pork barrel funds must step down from their posts, according to the Scrap Pork Network, which was behind a massive protest against the misuse of public funds in 2013.

In a statement, the group said Senators Juan Ponce Enrile, Jinggoy Estrada, and Ramon Revilla Jr. must yield their positions for wrongfully wielding their power.

It noted that they should have stepped down much earlier when they were first linked to the alleged pork barrel scam.

“In the face of overwhelming evidence, we are making an immediate call for the resignation of Senators Enrile, Estrada, and Revilla. This, too, is overdue. In other countries a mere hint of wrongdoing is enough for public officials to resign their posts,” the group said.

The Office of the Ombudsman earlier found probable cause to indict the three senators, along with businesswoman Janet Lim Napoles, for plunder and graft for their involvement in an operation to funnel pork barrel funds to dummy non-government organizations in exchange for kickbacks.

The Scrap Pork Network also lamented that some of the country’s lawmakers have apparently become its lawbreakers, and that the alleged corruption of people’s money has managed to go on under the Aquino administration.

“The current administration’s ‘Daang Matuwid’ philosophy continues to be ignored by corrupt officials who steal budgets for food security or who chip away at monies intended for public infrastructure, defense systems, healthcare, education and social services,” it said.

It further said the kickbacks that Enrile, Estrada, and Revilla received were “but the tip of the iceberg of fund scams.” It was looking forward to more indictments, it added.

“Seven months after our protest in Luneta, we believe that a full accounting by, and prosecution of all involved, are overdue,” it said.

The network reiterated its demand that all kinds of pork barrel funds be scrapped, and that all those who misused the people’s money must be investigated and punished.