Pagasa warns public: Don’t stay too long in the sun 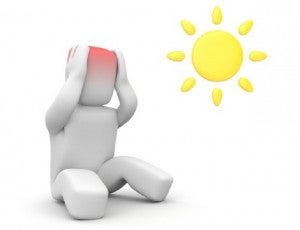 MANILA, Philippines—Avoid staying in the sun for too long as the effects of summer temperatures on your body could be worse than you think.

The “heat index,” a measure of the discomfort caused by heat on the human body, shows Filipinos could be experiencing hotter temperatures than what the thermometer says, the Philippine Atmospheric, Geophysical and Astronomical Services Administration (Pagasa) said on Tuesday.

Based on Pagasa’s five-day forecast, the maximum heat index will range this week from 38.7 to 39.4 degrees Celsius in Metro Manila, and from 39.8 to 40.2 degrees in Tuguegarao City.

The heat index calculates what the temperature feels like in one’s body, rather than the actual temperature reading.

Effects on the body

A heat index of between 32 and 41 degrees must be taken with “extreme caution,” according to Pagasa.

Among the possible effects on the body are heat cramps, or muscle spasms resulting from loss of salt and water, and heat exhaustion.

A heat index of over 54 degrees means “extreme danger” and indicates that heat stroke is imminent.

There are, however, no signs of a heat wave, which requires three consecutive days of the temperature reaching three degrees higher than average (in Metro Manila, the average summer temperature is 35 degrees).

On Tuesday, the temperature in Manila  hit its peak at 35.3 degrees at 1:50 p.m., a touch cooler than the 36.4 degrees recorded on May 1, the hottest day in the capital so far this year.

In its latest weather update, the state weather bureau said overcast skies with scattered rains in the afternoon or evening would prevail over the archipelago this week.

Easterlies, or warm, moist winds emanating from the Pacific, remain the dominant weather system, bringing general cloudiness in most parts of the country, Pagasa said.

“From May 5 to 9, the whole country will have partly cloudy to cloudy skies with isolated rain showers or thunderstorms mostly in the afternoon or evening,” Pagasa said in its weekly outlook.

Over the weekend (May 10 and 11), Mindanao will experience cloudy skies with scattered rain showers and thunderstorms due to the trough of a low-pressure area.

The rest of the country will have partly cloudy to cloudy skies with isolated afternoon rain showers or thunderstorms, Pagasa said.

Light to moderate winds blowing from the northeast to the east will prevail over the country, and coastal waters throughout the archipelago will be slightly to moderately rough, Pagasa said.