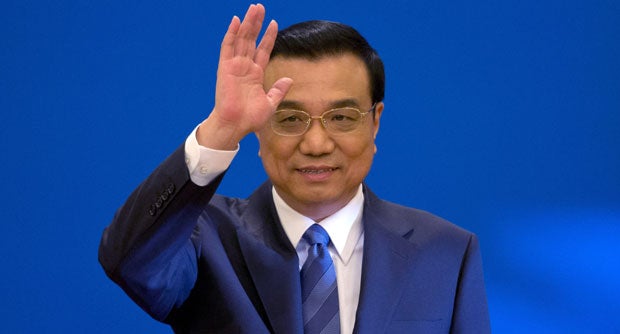 In this March 13, 2014 file photo, Chinese Premier Li Keqiang waves as he arrives for a press conference after the closing ceremony of the National People’s Congress held in Beijing’s Great Hall of the People, China. Li set off for a four-country tour of Africa on Sunday, May 4, 2014, acknowledging “growing pains” in China-Africa relations amid labor conflicts and other problems stemming from Chinese investment. AP

BEIJING — Chinese Premier Li Keqiang set off for a four-country tour of Africa on Sunday, acknowledging “growing pains” in China-Africa relations amid labor conflicts and other problems stemming from Chinese investment.

In a news release quoted by the state news agency Xinhua, Li urged Chinese companies to strictly abide by local laws and regulations, hold themselves accountable for the quality of their projects and goods and to consumers, and “shoulder due responsibility” for local communities and the environment.

Last year, China-Africa trade reached $210 billion, with more than 2,500 Chinese companies operating on the continent, according to Xinhua. But tensions exist around allegations of shoddy construction and a lack of respect for employment and other local laws. China has also faced allegations that its pervasive influence has more than a whiff of colonialism about it.

“I wish to assure our African friends in all seriousness that China will never pursue a colonialist path like some countries did or allow colonialism, which belonged to the past, to reappear in Africa,” Li said.

Li said companies have encountered “growing pains” and the Chinese government takes such issues seriously. He said that problems in the China-Africa relationship were, however, “isolated cases.”

Last year, Zambia’s government seized control of a Chinese-run coal mine, saying Chinese managers had failed to address safety, health and environmental concerns. In 2010, two Chinese managers at the mine were accused of shooting miners during a labor dispute, and later clashes reportedly saw one Chinese worker killed and two others injured.

Li also urged African countries to protect the lawful rights and interests of Chinese companies and the safety of their employees. China has come under increasing pressure from its citizens to protect their rights abroad.

Li and his wife Cheng Hong are on a weeklong trip to Ethiopia, Nigeria, Angola and Kenya, the first time the premier has visited Africa since assuming office last year. Li will visit the African Union headquarters in Addis Ababa and attend the 2014 World Economic Forum on Africa, held in Nigeria.