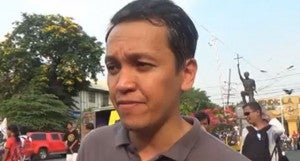 MANILA, Philippines—Nearly a week after  the Philippines and the United States signed the Enhanced Defense Cooperation Agreement, protests and uncertainty lingered, and this time, one militant leader said that the pact is one sugarcoated myth.

Bayan secretary-general Renato Reyes said in a statement Sunday that the EDCA is a fictitious agreement that promised benefits for both the Philippines and the United States.

Reyes said that there are five points in the EDCA that could pass off as unbalanced agreements that would only benefit the United States and not the Philippines.

“Philippine negotiators of the EDCA are working overtime to spread lies and misfortune about the recently signed military agreement,” Reyes said. “They want to make it appear that we are not on the losing end and in fact have everything to gain from the agreement.”

First of the EDCA’s myths, as Reyes said, was that the pact between the two countries would benefit both parties.

Reyes said that the sole benefactor of the agreement would be the US troops who would be given free access to Philippine bases and facilities.

“What does the US stand to gain? A lot,” Reyes said. “The US gains free access to PH lands and waters…giving the US a platform for power projection in the region as well as a launching pad for possible military intervention.”

Another one of the “myths” that Reyes pointed out is the lack of control of the Philippines on the “agreed locations” of the EDCA.

“We entered an agreement that allows the US unlimited access to our facilities while limiting access to theirs,” Reyes said.

According to Reyes, the US would retain operational control of the bases that would be used wherein Philippine access would have to comply with the “safety and security requirements” that the Americans would impose.

Third of his points is that the EDCA would not ensure that the US would defend the country against China.

His penultimate assessment of the agreement is that the EDCA still needs Senate ratification, despite the insistence of its proponents that it need not be.

“So long as it involves foreign troops or facilities, the agreement must go through the Senate,” Reyes said. “To be valid to our Constitution, EDCA should have been ratified by the Philippine Senate and recognized as a treaty by the US Senate.”

Reyes cited Article III Section 1 of EDCA, which promulgates the use and deployment of American troops, equipment, and vehicles in Philippine bases.

“We need to expose and shatter the myths being propagated by the Aquino government regarding the EDCA,” Reyes said.

No mention of China at signing of defense deal