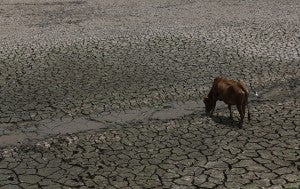 A cow tries to drink water from the bed of a dried rivulet at Mayong village about 40 kilometers (25 miles) east of Gauhati, Assam, India, Wednesday, April 30, 2014. Rising temperatures coupled with scanty rainfall is badly affecting farmers in many parts of this north-eastern state. AP Photo/Anupam Nath

Aksyon Klima Pilipinas said the PSF, which by law should be allocated at least P1 billion for climate change adaptation, must obtain its funds from the national budget as an important step in responding to the challenge of almost yearly climate change-induced disasters.

“This is why we continue calling on President Aquino to sign the revised Implementing Rules and Regulations of the Climate Change Act, so that the PSF can be mobilized,” said Aksyon Klima convenor Melvin Purzuelo.

“More importantly, it is high time for the PSF to be funded by the national budget, as it has been languishing with unprogrammed funds in the past two years,” Purzuelo said in a statement.

The PSF was established under Republic Act 10174 to “provide long-term finance streams to enable the government to effectively address the problem of climate change.”

Aksyon Klima said also that developed nations like the United States must honor their obligations in mitigating climate change.

It said US President Barack Obama, who recently visited the country, should curb US dependence on coal and hasten the shift to renewable energy.

The group noted the role of the US as the biggest emitter of greenhouse gases in the world throughout history.

Aksyon Klima said the United States should commit to emission cuts in the United Nations climate negotiations, in line with the recently released report of the Intergovernmental Panel on Climate Change.

“The Philippines and other poorer countries are already bearing the brunt of the problem without the means to confront it,” said Purzuelo, who is also the co-convenor of Responsible Ilonggos for Sustainable Energy.

“The US, with other richer countries, must honor their responsibility not only to mitigate but also to provide finance and technology transfer to poorer countries,” he said.

‘Gov’t must act on climate’