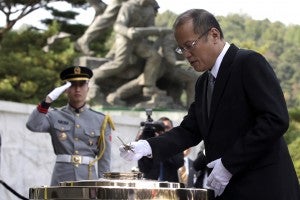 Environmentalists from Aksyon Klima Pilipinas are baffled why Malacañang has not activated the People’s Survival Fund  more than a year after it was created, delaying climate-change adaptation projects.

In an act hailed by environmentalists, President Benigno Aquino signed into law Republic Act 10171 setting up the PSF in August last year because the Climate Change Act of 2009 lacked such funding.

The PSF can be tapped directly by local government units and communities to support initiatives to adapt to climate change and reduce disaster risks.

But environmentalists lament that more than a year later, as Filipinos dealt with fiercer storms from the Pacific Ocean, the annual P1-billion PSF has yet to be activated.

“There’s no real effort. We can’t sense the urgency to operationalize it, yet there are several local projects anchored on that,” Voltaire Alferez, Aksyon Klima national coordinator, said in a recent interview.

There are a host of local communities that have crafted adaptation projects for vetting by the Climate Change Commission under the PSF, he said.

Commission secretary Mary Ann Lucille Sering told a budget hearing in the Senate in September that the implementing rules and regulations of PSF law were still on the President’s desk awaiting his signature. She said the same thing in April, Aksyon Klima said.

That’s the reason why the PSF has not been funded, Aksyon Klima convenor Elpidio Peria said. “That’s the bureaucratic way of putting it. If there’s no IRR, nothing moves.”

Aksyon Klima is a network of several civil society organizations advocating climate-change adaptation, among others.

The Department of Budget and Management has allotted P500 million for the PSF in the proposed P2.268-trillion 2014 national budget under  unprogrammed fund, Secretary Florencio Abad Jr. said.

“What the law provides is P500 million,” Abad said in a text message. But he admitted that since it’s under unprogrammed fund, the PSF could only be implemented if the “revenues exceed target” and if there are new sources of revenues.

Abad could not say why the PSF was not included among the items for specific funding in the 2014 budget.

“I am not sure but it’s possible that the law may have been enacted after the budget was put together,” he said. “But in any case, the PSF can be supplemented by calamity fund, contingency fund, and climate change-related budget items.”

Denise Fontanilla, Akson Klima advocacy officer, wondered why it was taking Malacañang too long to sign the IRR, and put the minimum P1-billion PSF in the programmed fund of the national budget.

“What’s stopping them?” she said.

In view of their concerns, Senator Loren Legarda said she would evaluate the disaster risk reduction and climate change adaptation budgets of each department “to ensure a resilient budget.”

“We must ensure the resilience of our agriculture and our nation against the recurring, more frequent and more intense natural hazards,” she said.