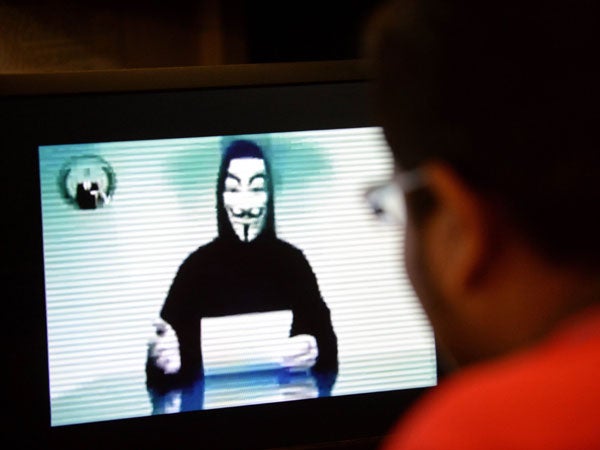 A person claiming to speak for activist hacker group Anonymous is seen issuing a warning throught a video circulated online to “go to war” with the Singapore government over recent Internet licensing rules on November 1, 2013. AFP

SINGAPORE–Activist group Anonymous hacked a Singapore newspaper website Friday and threatened wider cyber-attacks over Internet freedom, with government agencies reportedly on alert after the group said it would “wage war” with the city-state.

The website of the pro-government Straits Times was hacked early in the day by apparent members of the group, which is opposing recently introduced licensing rules for news websites in Singapore.

The attackers, using the name “Messiah”, took over the blog of a Straits Times journalist, saying she had distorted “our words and intentions” in a report on the group’s threat a day earlier to “wage war” on the Singapore government to protest Internet curbs.

“We oppose any form of Internet censorship among other things,” said a post on the journalist’s hacked blog, which has been taken offline.

The hackers urged the journalist to apologize within 48 hours “to the citizens of Singapore for trying to mislead them”.

If she fails to apologize, “then we expect her resignation”, the hacker added.

“If those demands are met we will be on our way. But in the event our demands are not met in the next 48 hours, we will place you in our ‘to do’ list and next time you wont (sic) be let off this easy.”

Asian media giant Singapore Press Holdings, which publishes the newspaper, said: “We have made a police report, and the police are investigating.”

The attack on the Straits Times followed a post on the video-sharing site YouTube on Thursday in which a person claiming to speak for Anonymous warned it will attack Singapore’s financial infrastructure if it does not rescind the new rules.

“We demand you reconsider the regulations of your framework or we will be forced to go to war with you,” a male voice said as a person hiding behind a mask appeared in the YouTube clip, addressing the government.

“Every time you deprive a citizen his right to information, we will cause you financial loss by aggressive cyber intrusion,” said the speaker.

Reacting to the YouTube clip, Singapore’s Infocomm Development Authority said: “We are aware of the video, and the police are investigating into the matter.”

The Straits Times, meanwhile, said it had learned that government agencies have been put on alert following the warning.

It said the alert directive came from the Government IT Security Incident Response Team, which was set up to coordinate responses to a cyber attack.

Blogs and social media have gained popularity as alternative sources of news and opinion in Singapore, where mainstream newspapers and broadcasters are perceived to be pro-government.

Singapore authorities have said the new rules provide clarity on existing standards for Internet content, and do not impinge on Internet freedom.