Immunity to give Tuason chance to ‘cook up lies,’ says Estrada 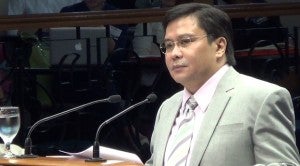 MANILA, Philippines—Sen. Jinggoy Estrada said Friday that socialite Ruby Tuason was granted immunity from prosecution in the P10-billion pork barrel scam to “cook up lies and tales” against him.

In a brief telephone interview with the Inquirer, Estrada called the pork barrel scam investigation a “farce.”

He said Tuason, a former social secretary to his father, former President Joseph Estrada (now mayor of Manila), and a family friend, would “crumble” under cross-examination.

Tuason returned to the government yesterday P40 million in commissions that she earned from the pork barrel scam allegedly masterminded by businesswoman Janet Lim-Napoles.

She admitted serving as bagman for Napoles handing millions of pesos in kickbacks to Estrada and to the former chief of staff of Sen. Juan Ponce Enrile, lawyer Jessica Lucila “Gigi” Reyes, presumably for Enrile himself.

Napoles, Estrada, Enrile, Sen. Ramon Revilla Jr. and more than 30 other former lawmakers and government officials are facing plunder charges in the Office of the Ombudsman over the misuse of the Priority Development Assistance Fund (PDAF).

The camps of Enrile and Revilla declined to comment on the grant of immunity to Tuason. Estrada and the two other senators have denied any wrongdoing.

In an interview on ANC, Estrada said he was not surprised that the Ombudsman gave Tuason immunity, as it was a “done deal” and part of a plot to persecute him and the two other senators.

“I was not surprised by the turn of developments,” he said “We all know that this is already a done deal and the only real targets of this persecution from the very beginning are the three senators.”

Besides, he said, the Department of Justice’s recommendation to file plunder charges against Tuason over the racket was a ruse to project a “semblance of fairness.”

Malacañang welcomed the grant of immunity to Tuason, but did not respond to Estrada’s comments.

“We note the grant of immunity by the Ombudsman to Ms. Tuason, which is allowed pursuant to the Ombudsman Law. We hope that with immunity, Ms. Tuason can reveal the whole truth, thus aiding in the people’s quest for justice,” Communications Secretary Herminio Coloma said.

Testifying at a public hearing on the scam called by the Senate blue ribbon committee in February, Tuason said she delivered millions of pesos in kickbacks from the scam to Estrada in his Senate office, a comedy bar and his home in San Juan City.

She said she also delivered kickbacks to Reyes in posh restaurants.

Estrada said he had yet to consult his lawyer on what to do next, but expressed confidence that he could defend himself should the Ombudsman send the case to trial in the antigraft court Sandiganbayan.

“In the unfortunate event that an information is be filed in the Sandiganbayan, I am very confident that we will be victorious in the end and Mrs. Tuason will crumble under cross-examination,” he said.

The Ombudsman last month found probable cause to charge the three senators, Napoles and the others with plunder.

“You’re guess is as good as mine,” Estrada said when asked whether Tuason could get away from prosecution in connection with the P900-million Malampaya Fund scam.

Tuason is facing a plunder complaint along with former President Gloria Macapagal-Arroyo (now a Pampanga representative) and 22 others over the alleged misuse of P900 million in proceeds from the Malampaya gas fields off Palawan.

Tuason allegedly received P242 million in kickbacks for a still “unidentified principal” in the scam.

The grant of immunity to her in the pork barrel scam case does not cover the Malampaya case, which is still under evaluation by the Department of Justice.