Labor group Kilusang Mayo Uno expects thousands of workers and advocates of labor rights from various sectors of society to join the protests in Metro Manila and in other parts of the country.

Welcome Rotonda is one of the areas of convergence. Others will also gather in Monumento, Quirino, Stop N Shop, and Plaza Hernandez in the morning and then march to Liwasang Bonifacio and then to Mendiola in the afternoon. 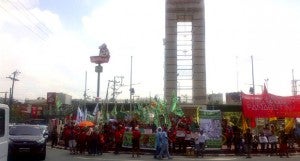 “Workers and advocates of workers’ rights have every reason to join this year’s Labor Day protests. Aquino has been pressing down wages, has just signed the EDCA and is pushing for Cha-cha, showing the world just who his real ‘bosses’ are,” said Roger Soluta, KMU secretary-general.

Renowned theater actress and activist Monique Wilson and international delegates to the KMU’s International Solidarity Affair, which marks its 30th anniversary this year, will also join the Labor Day protest in Manila.