Roxas on photo with rival Binay: Nothing unusual 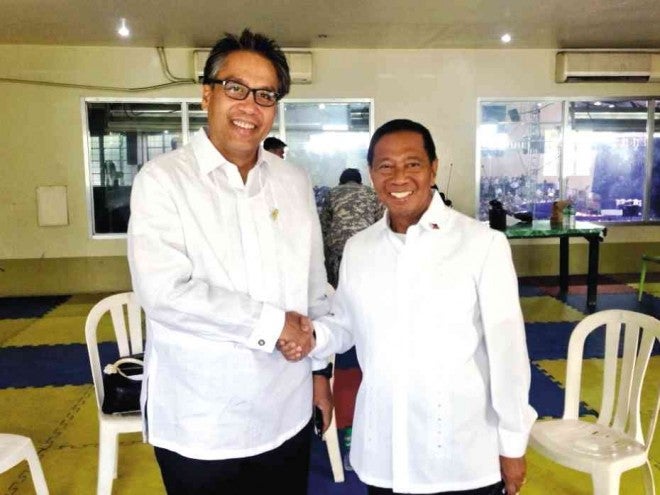 ‘WE CAN’T GO ON MEETING LIKE THIS’ Feuding archrivals DILG Secretary Mar Roxas and Vice President Jojo Binay have been thrown in each other’s company for two days meeting, saying goodbye to Obama. On Tuesday at Army HQ on BGC they not only meet but greet. LOREN LEGARDA

That was how Interior Secretary Mar Roxas described Wednesday the photo-op with his staunch political rival, Vice President Jejomar Binay, at the Army headquarters in Taguig City where visiting US President Barack Obama delivered a speech on Tuesday.

The picture of Roxas and Binay was set up by Sen. Loren Legarda, who supposedly told the two: “Why don’t you speak to each other. Stand here and I will take a picture.”

Recalling the incident, a chuckling Roxas said he did not feel uneasy when he shook the hands of Binay, who beat him as vice president in the 2010 national elections.

During their brief conversation, the interior secretary said they talked about basketball and Marine One, Obama’s official helicopter which the American leader used during his two-day state visit.

“We also spoke about the sweltering heat and other things,” he said.

Although he could not recall the last time he shared a light moment with the vice president, Roxas said they usually meet during the Cabinet meetings at Malacañang.