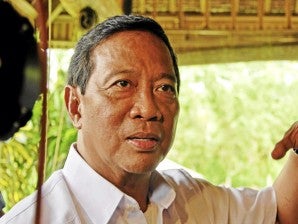 MANILA, Philippines—Vice President Jejomar Binay is the top pick of 1,200 respondents as president come 2016 elections, according to the latest commissioned survey of Pulse Asia, Inquirer Radio 990AM reported Wednesday.

In the report, 40 percent of respondents said Binay is their pick as president if the elections were held that day.

The second top pick with 15 percent is neophyte Senator Grace Poe, the daughter of the late action star Ferdinand Poe Jr. and who led in the senatorial elections in 2013.

Even Presidential sister and television host Kris Aquino got the pick with four percent of respondents wanting her to be president, according to the report.

Aquino is followed by Sen. Ramon “Bong” Revilla Jr. with three percent wanting him president despite the plunder and graft charges the senator faces for his alleged involvement in the pork barrel scam.

Reached for a comment, the Office of the Vice President through Binay’s spokesperson Joey Salgado said Binay would not comment on the survey since the report did not come from Pulse Asia’s official press release.