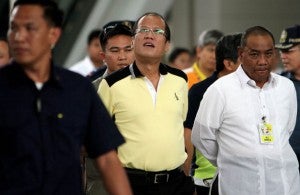 MANILA, Philippines–While President Benigno Aquino’s trust and approval ratings remained “constant,” those of other ranking government officials registered marked changes one way or the other, results of the latest Pulse Asia survey showed.

But among three government institutions—the Senate, House of Representatives and Supreme Court—only the latter received a positive approval rating.

Trust in the President also went down to 69 percent from 74 percent in December, dropping across all areas and classes.

“The movements in President Aquino’s ratings at the national level and across geographic areas and socioeconomic groupings are not considered significant as they fall within the relevant error margins,” said Pulse Asia.

Trust in Binay and Drilon both also climbed—to 86 percent from 77 percent and 55 percent from 40 percent, respectively, across all areas and classes.

The Vice President also posted a marked increase among Classes ABC (80 percent from 64 percent), D (86 percent from 77 percent) and E (87 percent from 83 percent).

The Supreme Court posted an approval rating of 53 percent, while the Senate and the House of Representatives both slid four points to 41 percent and 38 percent, respectively.

The survey used face-to-face interviews with 1,200 adults aged 18 and older. It had a margin of error of plus-or-minus three percentage points. Rafael L. Antonio, Inquirer Research

President’s ratings still up, but down in Metro Manila