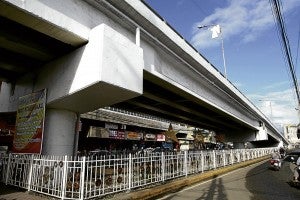 MANILA, Philippines—Bridges and flyovers are intended for the use of motorists and other transport-related purposes, not for human settlement.

This was stressed Wednesday by the Department of Public Works and Highways when it called on local government units in Metro Manila and the rest of the country to clear these structures of informal settlers or squatters and “ensure the  protection of state infrastructure facilities.”

The DPWH said in a press statement that “LGUs, specifically barangays are in a position to call the attention of its residents, including informal settlers living under bridges and other public structures, as well as along esteros, or waterways.”

It said a recent fire that destroyed squatter homes and stores under the Quezon Bridge in Manila also damaged the “structural integrity of the single span steel structure,” which is several decades old and has had to be closed to trucks and buses.

The DPWH office in the National Capital Region is “now preparing a program of work to facilitate the repair of the damaged bridge,” said Elizabeth Pilorin, director of the agency’s Public Information Division and Stakeholders Relations Service.

Last week, DPWH-NCR director Reynaldo Tagudando told the Philippine Daily Inquirer they would push for the “total rehabilitation” of the bridge after the reinforcement of its structure is completed.

He reported that “the construction of temporary shoring using steel H-piles (on floor beams) to reinforce the bridge continued even during the Holy Week.”

“More tests will be conducted after this activity to determine the full extent of the damage by the April 10 fire on the bridge’s structural integrity,” he said.

Quezon Bridge, which was built in the 1940s, will remain closed to heavy vehicles, or those weighing more than 10 tons, while repairs are ongoing, according to Tagudando.

In a related development, the DPWH regional office in Northern Mindanao reported to the agency’s head office in Manila that Marcos Bridge, the biggest and busiest bridge in Cagayan de Oro City, had been cleared of informal settlers.

“To allow full utilization of the bridge, a total of 64 illegal settler families, along with their shanties and some business stalls, were removed recently,” said district engineer Anastacio Marundan. “The next step is to clean and repaint the entire bridge area, our contribution to the city’s beautification and cleanliness campaign.”