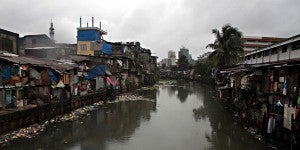 Informal settlers’ dwellings packed together side by side along the waterway of P. Casal bridge in Quiapo, Manila. INQUIRER PHOTO

MANILA—Squatters should not attempt to return to the esteros after they’ve been relocated, otherwise they would be arrested, Malacañang declared Wednesday.

President Benigno Aquino III’s spokesman, Edwin Lacierda, said informal settlers who opt for relocation outside Metro Manila would get P18,000 in financial assistance outright, but those who will rent out rooms would get the rental subsidy in tranches.

After this procedure, the president’s spokesman said, the declogged esteros or canals would be off-limits to squatters.

The government is scrambling to implement a five-year, P50-billion program —or P500,000 per person—to move 100,000 estero-dwellers in the capital to safe, permanent resettlement areas, which was unveiled in 2011 by President Aquino.

With flooding submerging many parts of the capital after a heavy rain, local government officials are now dead-set on clearing eight major waterways of 19,440 families by year-end to ensure freer flow of floodwaters into Manila Bay.

The officials are offering P18,000 as assistance for those relocating to off-site housing  areas, or as a subsidy for those renting out rooms for 12 months to allow the National Housing Authority to find permanent resettlement homes for them.

Local Government Undersecretary Francisco Fernandez, the official in charge of the relocation, said it was cheaper for the government to subsidize their rent than to rescue, evacuate and rehabilitate them later after a powerful storm.

Urban poor have called this a band-aid solution, saying the total  P360-million relocation assistance was better spent on permanent housing.

The NHA has built 4,500 off-site units, and is adding 3,500 more near-city units this year, or a total of 8,000 units. To cover the rest of the 19,990 families, the Social Housing Finance Corp. is offering financing for families to build low-cost homes under the “people’s plan.’’

Once a unit is fully paid, the title will be transferred to the former squatter.

“As soon as they’re relocated, they will be given P18,000 in full. Now for those who are willing to be relocated while their structures are being completed, it will be in tranches,’’ Lacierda said.

Before transporting them to relocation sites, the government would process the estero-dwellers through biometrics to be able to keep track of their movement, local government officials said.

“Some say this is a band-aid solution. We say this is first aid because this is our initial assistance for the families who are in danger zones, in the esteros in the eight major waterways,’’ Lacierda said.

Responding to questions raised by the middle class on social media on whether the government has a similar program for them, Lacierda explained that the government was prioritizing the relocation of squatters out of danger areas.

If at all, the middle class could always avail themselves of loans from the PagIbig Fund to build or buy their own homes in the capital, Lacierda said.

“This is for the betterment of the entire people because those in the esteros,  they contribute … to the flooding. You’re working, and you don’t live in the estero but if you get flooded, you have no work.  You get affected by it,’’ he said.  “We solve the waterway problem, we solve the estero with the end view of benefiting all.’’